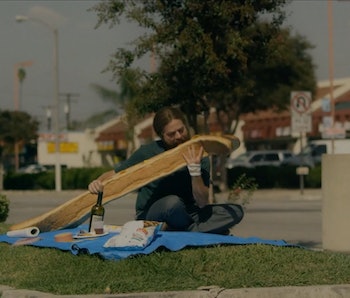 After last week’s episode of Baskets, the series’ most emotionally heavy episode to date, it was unclear how the show would continue. Would we get back some of the humor, or would we continue down that same path of despair and introspection with few moments of comedic relief? Thursday night’s episode “Picnic” opted for the latter, as it took us back in time to Chip’s (Zach Galifianakis) stint at a clowning school in Paris, where he met his eventual ex-wife Penelope (Sabina Sciubba).

The episode contextualizes Chip’s and Penelope’s relationship, which we were thrown into while it was already crumbling at the beginning of the season. Based on the flashback to Paris, it’s clear that no one but Chip is responsible for his seemingly insurmountable state of dejection. Finally, though, he wants to take responsibility.

In the flashbacks to Paris, Chip is a totally different person than the sad sack in present-day Bakersfield. He is studying clowning at a prestigious academy (albeit without speaking a word of French, making him rather clueless) and gallivanting around the colorful city with other vibrant street clowns. Chip heads to a party with his clowning friends, where he discovers Penelope playing the guitar in the back room for a small crowd.

Completely captivated by her beauty and talent, Chip approaches her after the show to tell her how much he enjoyed it. Right from the get go, we see that Penelope is rude and coarse; she’s the stereotypical snobby Parisian. She assumes Chip just wants to meet her father, a famous French musician, but Chip doesn’t know who he father is—he just wants to get to know her.

Penelope’s father ends up playing a huge role in her decision to move to marry Chip and move to America, which is the primarily what the flashback to Paris elucidates. She is fed up with living in the shadows of her successful father, yet she’s too spoiled and self-serving to separate herself from him. He chastises her for being outspoken and brash yet too cowardly to try and make it on her own. He knows she’ll always come crawling back when the world gets too tough.

Chip, in a way, is revenge: A scene in Paris shows Penelope and Chip attending one of her father’s concerts where Chip makes a complete fool of himself when he accidentally slips and shatters a pyramid of champagne glasses. The whole room is visibly appalled, especially Penelope’s father, but she notices that Chip’s unabashed crudeness gets under her father’s skin.

Later in the flashback, Chip proposes to Penelope at dinner. She rolls her eyes when he pulls out the ring and right away tells him that she will marry him not because she loves him but because she wants to escape to America and get a green card. It’s a big reveal: we see that Chip has been in denial from the very start of his relationship with Penelope.

While Penelope is absolutely awful, at least she’s honest with Chip from the beginning. It’s Chip’s own fault that he agrees to marry a woman whom he knows is using him for her own gain. While they celebrate in the park with a picnic of wine and cheese, she warns him again that they’re making a mistake. “I’m going to disappoint you Chips,” she says, her apparent apathy for him echoed in the fact that she can’t make the effort to say his name correctly.

The episode returns to Chip’s life in Bakersfield, juxtaposing the bleakness of America’s consumer society with the romantic setting of Paris. Chip goes to a Subway-type sandwich establishment to buy a french baguette so he can recreate the picnic he and Penelope had the night they got engaged in Paris. But this is America—the shop doesn’t sell french baguettes, but they do sell six-foot long subs accompanied by various kinds of “squirts” (Chip eventually chooses the limited time yellow squirt).

In another one of Basket’s most heartbreaking moments, Chip sets up a picnic for one on a lawn in front of a nondescript strip mall. He tears into the oversized loaf of bread as he sits alone on a crinkled tarp while cars speed by on a busy street. Realizing he has hit rock bottom in his futile attempts to recreate the magic of Paris in Bakersfield, he packs up his picnic and throws it in the trash. It’s the defining turning point for Chip in which he finally comprehends that Penelope doesn’t love him and never even liked him and that his sick mother deserves his care and attention. The life he has been leading in Bakersfield is not the romantic picnic he wants it to be but a nightmare shrouded in denial and anger. It may have taken Chip hitting his rock bottom to get to this point, but his major breakthrough should brighten things up moving forward.