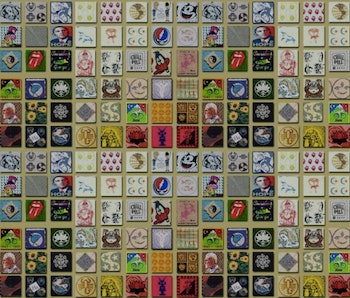 Ravers in India are brashly flaunting their LSD habits right under the noses of suspecting policemen by wearing acid tabs as temporary tattoos. Printed with images of animals and cartoon characters, the thumbnail-sized squares of blotter paper can certainly pass as benign stick-ons when pressed onto a tricep, and Chennai users have co-opted the mark as a signal to other partygoers that they’re ready to turn on and drop out.

The resurgence of the LSD tattoo craze is reminiscent of the Blue Star Hoax, which set concerned middle school parents in the 1970s and 1980s on a wild goose chase for temporary tattoos, printed with a Dallas Cowboys-esque blue star, that were supposedly soaked in LSD and distributed to kids. Police never actually caught anyone distributing lick-and-stick tattoos because they simply didn’t exist; they were just mistaken about what actual acid tabs looked like.

Chennai police, who suspect that the tabs are being brought in by party organizers in Mumbai, Goa, and Delhi, seem to be running into the same problem. The drug has become increasingly popular on the city’s party circuit over the past six months, prompting law enforcement efforts to zero in on the root of the supply chain before it spreads. They’ve yet to make any arrests for drug use, but they have picked up several kids with strips of 10 to 15 stamps — which sell for roughly $15 apiece — in their pockets.

Their sentences, however, have been surprisingly light. As the Times of India reports, kids are being let off with a “stern warning” because drug-related arrests could irrevocably derail their careers. While their concerns about kids tripping in public are justified, they have little reason to worry about the effects of sticking the tabs on skin: LSD isn’t absorbed that way, at least not to any hallucinogenic effect.

More like this
Mind and Body
20 hours ago
How music makes you feel may depend less on your brain than scientists once thought — study
By Allison Parshall
Mind and Body
3 hours ago
Male birth control is at our fingertips. Will we ever grasp it?
By Elana Spivack
Mind and Body
6.27.2022 10:30 AM
What’s the best way to wash your face? Dermatologists explain the science of clean skin
By Katie MacBride
Related Tags
Share: