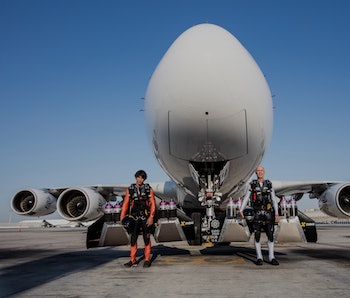 Yves Rossy is a Swiss Air Force Pilot who now makes his living flying around Dubai with a large kevlar wing and several jet engines strapped to his back. On Wednesday, Rossy and fellow jet-propelled-madman Vince Reffet went on Conan to talk about wingsuits, jetpacks, and the future of people blasting themselves through the sky.

Host Conan O’Brien was incredulous, asking Rossy, “Will this ever be something that’s commercially available?”

Rossy, in heavily accented English, smiled and said, “Maybe not this model, but it comes for sure, yes.”

Conan rightfully saw that this could be a very bad idea.

“I see people make terrible decisions in the Prius ahead of me going 20 miles per hour!” he said, “I fear for them in this suit!”

But Rossy and Reffet are both extremely experienced in the air. Rossy was both a military and commercial pilot for years, and Reffet is a world-record-holding BASE jumper.

“It [the suit] is like an extension of our body,” Reffet said. “We can fly in the air like a bird.”

They’re both professional “Jetmen” for XDubai, an action sports company based in a city where even the paramedics will have jetpacks soon.

And they’re not the only jet-propelled guys in the sky — JetPack Aviation claim that their suit, which uses only jet engines, without the stabilizing wing, is the only true “jetpack.” JetPack Aviation’s rig flew around the Statue of Liberty last year. JetPack Aviation thinks they could have a civilian model out in the near future, but the price tag would most likely be in the millions.

JetPack Aviation’s design tops out at about 85 miles per hour — the flying-wing design that Rossy and Reffet used to fly in formation with the Airbus A380 is capable of much faster speeds, up to 195 miles per hour. And while they’re definitely progress to a jet-commuting future, it’s still probably best to leave flying to the professionals.