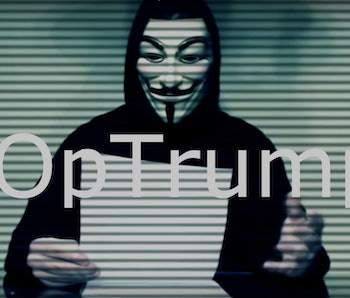 Anonymous is going after Donald Trump again, and this time they are calling out every person with a computer to join #OpTrump.

In a video posted to YouTube on March 4, a man in a Guy Fawkes mask with a computerized English accent delivers his message: The war on Trump begins on April 1, starting with an attack on the official website of Trump Tower in Chicago.

“This is not a warning, this is a declaration of total war,” the man in the video ominously says over background music fit for a cavalry charge. “Operation Trump engaged. We are Anonymous. We are Legion. We do not forgive, we will not forget. Donald Trump, it is too late to expect us.”

The YouTube account might be familiar to anyone following the hackers under the Anonymous name. It is the same person who disbanded Anonymous operations after a branch of the hacking group took on Hungary, Turkey, Cloud Flare and Trump in a cyber war, the video states. But it wasn’t because the group officially supports Trump.

“In fact, #OpTrump is the only thing they accomplished that we admired,” the man in the video says. “We the loyalists and veterans of Anonymous have decided to revive this operation on a larger scale.”

Among the list of Trump abuses the video singled out: calling all Mexicans rapists, calling Rosie O’Donald fat, claiming Megyn Kelly went after him because she was on her period, and declaring he would date Ivanka if she weren’t his own daughter.

The first time Anonymous went after Trump was after the wannabe candidate made comments about denying all Muslims entry into the United States. They successfully took down the Trump Tower New York website after that declaration. Then in early March, Anonymous hacktivists finagled their way into Trump’s voicemail, changed the greeting, and leaked some messages.

The latest video calling for action contains a link to some pretty damning Trumpformation, a summons for people wanting to join in. The info dump includes his websites, family members, and social security number.

If the current #OpTrump is anything like the last ones, April 1 will be an interesting day for the Republican frontrunner, likely nominee, and orange skin enthusiast.

More like this
Innovation
12 hours ago
9 veggies that are healthier cooked than raw
By Laura Brown and The Conversation
Innovation
6.24.2022 5:00 AM
Beam-steering radio technology could help autonomous cars finally hit the road
By Sascha Brodsky
Innovation
6.21.2022 11:00 AM
No, Google’s Deepmind isn’t on the verge of human-like reasoning
By Tristan Greene and Undark
Share: