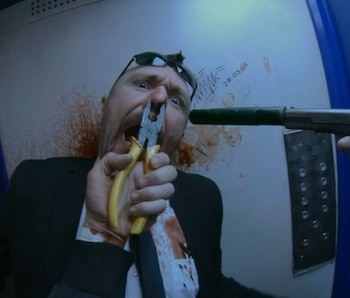 Some allegedly groundbreaking ideas for movies are better left as wishful thinking than actual feature films. Take Hardcore Henry, the new outrageously bonkers action movie by Russian director Ilya Naishuller, shot entirely in a first person POV. Sure it sounds like a cool idea — whoa, let’s take the angles of video games like GoldenEye or Doom and make an entire movie like that! — but does it actually transcend the gimmick and prove that it’s worth watching for more than five minutes?

In this case unfortunately not, as Hardcore Henry overstays its welcome a little bit less than five minutes into its seemingly endless, but nevertheless harrowing, 95-minute runtime.

The first-person shooter video game comparison is obvious, but telling. Firing up your N64 and playing GoldenEye is awesome because you get to play James Bond and pump bullets into droves of computer bad guys to win the game. It’s a classic, but have you ever sat for an hour and a half and just watched your friends play GoldenEye? If so, the aching boredom and disorientation that goes along with it will become apparent if you watch Hardcore Henry. Yeah, the action is great and there are cool guns or whatever, but when all is said and done, it’s like watching someone else play a video game for you.

That’s not any fun, and consequently, neither is Hardcore Henry, a movie so obsessed with trying more and more supposedly cool shit — like having the camera jump off a building or multiple close-combat fights with henchmen wielding flamethrowers — that it never stopped to think of having a plot. It’s about super soldiers or something, but the movie never really bothers to adequately explain anything, so why should we care? At least something like Crank had a purpose underneath its extreme aesthetic.

Having a less-than-thin plot is probably the point, but don’t let the flamethrowers or crazy sounding action fool you. Being technically brilliant is one thing, making a brilliant movie is another.

It does have Sharlto Copley — probably the hammiest actor on earth — as Jimmy, a sort of commando/scientist/exposition-dump that constantly pops up to tell the conveniently mute title character (and the audience) all he needs to know. But his constant respawning as multiple characters because of some convoluted but meaningless plot point just confuses even further.

But the real star here is the camerawork. Too bad the action it tries to capture is overly jittery and nauseatingly hyper; and the humor it frames is indicative of the gamer culture that it tries to co-opt. This will surely be the Gamergaters’ film of choice after they wear out their blu-rays of Deadpool.

Hardcore Henry is significant because filmmakers are increasingly inserting video game language into feature filmmaking. It might’ve worked as a viral YouTube hit, or a VR experience. It could have at least been presented in 3D to justify its techniques. Instead it’ll merely be a cautionary example of what not to do in moviemaking. Resist the urge to see Hardcore Henry. You’re better off playing any other video game.