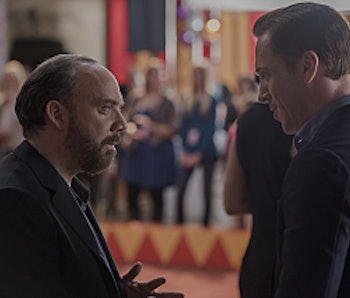 Insofar as we have a morally questionable figure pulling all the strings in Billions at this point, it is certainly Chuck Rhoades, not Tommy Axelrod; Rhodes says it himself to Connerty in last week’s episode. Despite the final revelation of this week’s installment — Donny is working as a double agent for both Connerty and Axe — it is still Chuck who dominates the action: tacitly prompting the Axe 9/11 scandal leak, and in general, facilitating all of the attorney’s office’s shadier gambits. The dirty dealings pile up to point that even Chuck is wrestling with some sort of drunken existential crisis after trying to convince Connerty he did the right thing by engineering a false informant. He resents the fact that he, through Wendy, benefits from Axe’s dirty money; that he is blinded to this hypocrisy, and everything else, by his hatred for the man.

The show is fairly heavy-handed about the moral relativity point, pulling no punches during Connerty’s dinner with Sacker’s businessman father. “Doing bad to do good” — isn’t that still bad? When does the scale get it? Sure, it’s deathly unsubtle, but so is this whole show. It’s plotted skillfully enough that it doesn’t matter; viewers have settled into the over-the-top melodrama by this point, and if they are experienced viewers of Showtime original programming, it’s nothing out the ordinary anyway.

Billions is nothing but fun at this point, and the one-liners anchor the episode in significant ways; they remain humorous, but that’s at least part of the point. The lynchpin of this episode? Giamatti’s baiting of Connerty by making fun of his healthy eating: “You young guys, eating your salads and remaking the world,” he sneers. In Rhodes’ mind, it seems, the salad-munching sissies of the 20, 30 and 40-somethings are crippling the world with their beta-ness. A dominant-submissive relationship of sorts has been set up between Rhodes and Connerty through Rhodes’ backseat driving of the Axe Capital case, except of course — unlike at home — Chuck is on top here. Man up, “throw some kimchi on that,” at least, Chuck comically insists to Connerty.

Billions’ unabashed commitment to its post-Wall Street-and-Boiler Room ethos and its excellent acting are its saving grace. It channels prestige TV elements without becoming pretentious, and undermining its soapy, late-‘90s-suspense-flick appeal. At times, a pleasant Tony Soprano element creeps into Axe’s dealings: He is, in his own way, a head case, someone who legitimately thinks he is trying to be a fair leader and a good man. The juxtaposition between Chuck’s ruthlessness and Axe’s remorse in this episode makes it one of the finest of the series so far. At this point, it seems like both parties will take a serious hit in ending this war; it’s compellingly difficult to predict how the season will sort itself out.