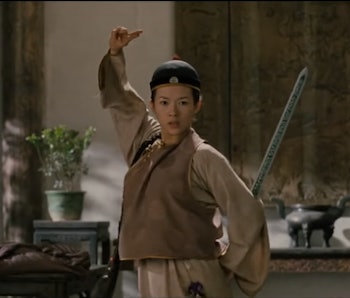 Ang Lee’s 2000 film Crouching Tiger, Hidden Dragon is something of a modern classic, famous for its almost-ethereal stunts and contemplative fight scenes. Though the Netflix installment hasn’t been as well-received, it has succeeded in replicating the most original innovation from CTHD, the replacement of earthly physics with something else entirely.

Why is it that the warriors in Crouching Tiger can leap over buildings or effortlessly flip over (and around) their opponents? To put it simply: The physics in Crouching Tiger, Hidden Dragon are conveniently elastic. And yeah, it’s totally and completely wrong, but that’s not the point. The point is that these movies posit the supremacy of the internal. Long-term training and enlightenment teaches these heros to bend and break physical laws. This premise requires a healthy suspension of disbelief, but it’s ultimately quite beautiful and, somewhat ironically, disarming. So let’s take a closer look at how physical motion works in this world.

Probably one of the most significant instances of flex-physics in Crouching Tiger, Hidden Dragon is the leaping.

In the films, characters leap in impressive arcs, into and out of combat, over bodies of water and onto rooftops. While there’s a blatant disregard for the laws of motion as we know them, the only way to explain these physics-defying moves is with an assumption: that these characters have incredible (and extremely nuanced) control over force. Simply put, they have an unseen ability that allows them to flip gravity the finger when they want to scale a building in a single bound, and use it to their advantage with swords with brutal precision.

To illustrate: In the clip above, Shu Lien (she’d be the one who isn’t dressed like a thief) goes toe to toe with the figure in black, who’s stolen the Green Sword of Destiny. When the thief (sorry, spoilers; that’d be Jen Yu) attempts to leap upwards and away from Lien, Lien steps on her foot, returning her to the ground. That all makes sense, aside from the floating part: Lien uses force to bring Yu back to the ground. But seconds later, Yu leaps a bit higher, and Lien floats up after her, pulling her to the ground.

When we see Lien floating up and pulling Yu back down to the ground, physics as we understand them would dictate that Lien should float further upward as she applies that downward force on Yu in the air. That comes back to Newton’s Third Law: Every action has an equal and opposite reaction. But Lien doesn’t move upward. Instead, they both return to the ground.

Again, healthy suspension of disbelief — but if we wanted to apply a system of understanding to the physics here, it would require us to believe that these enlightened warriors have total control over applied and gravitational forces and can manipulate them second by second, move to move. Otherwise, bucking Newton’s Third Law only to use it a moment later when pushing off of the ground to jump onto the rooftop is completely out of the question. Make sense? Cool, let’s move on.

You’d think that fighting without the help of gravity would be hard, and you would be totally right. It’s really hard, but maybe not for the reasons you’d think. Let’s think of it with the Moon in mind.

Even though it’s a little hard to imagine the astronauts on the Moon (which has about 17% of Earth’s gravity) punching each other, it’s possible. And, if you’re looking for the Superman-esque “punching opponents up into the air” effect, potentially pretty damn cool. Force is mass times acceleration — even when your weight changes, your mass doesn’t](http://www.colorado.edu/physics/2000/periodic_table/mass.html). You can still exert force in zero or low gravity; the trick is sticking around for the fight.

When you punch someone, you’re met with a resultant force of that punch. Depending on how hard you punch, how your feet are planted (which in low gravity situations is going to be simply “not well”) and whether or not you’re a superhero, you might stagger or fly backwards. In situations where gravity isn’t anchoring you to the ground the way it does on Earth, if you throw a punch, the recipient of your blow is going to fly/float away from you and you’re going to fly/float away from them in the opposite direction. Not the most effective way to fight, right?

What’s more, Newton’s First Law states that an object in motion stays in motion until acted upon by an outside force. Most of the time, that force is gravity or, you know, another object. Without gravity’s help, you and your punchee will continue to float away from each other, until something stops you unless you punch upwards (forcing yourself into the surface you’re standing on) or hold them in place. Think hockey players trying to fight on ice and you’ll start to get the idea.

But that’s not what we see in Crouching Tiger, Hidden Dragon. Instead, the enlightened characters in the films seem, once again, able to manipulate the gravity at will, using it to anchor themselves, land accurate strikes and even keep their opponents in place so that they can take the next strike, too — though perhaps you could argue that unenlightened opponents simply stay in place because gravity remains constant for them.

To be clear, we aren’t seeing characters in Crouching Tiger suspend gravity altogether. If that were the case, they wouldn’t be able to jump in those sweeping and accurately-placed arcs. Instead, they’d be doing some pretty sloppy floating, not bounding effortlessly, taking off with small amounts of force, and returning to the ground slowly and gracefully. They certainly need gravity, but apparently are able to fine-tune it.

There are dozens of examples of bendy physics in the Crouching Tiger‘s fight scenes, and each of them prompt their own questions, but the underlying concept is that Crouching Tiger, Hidden Dragon*’s treatment of physics, however fundamentally wrong and unrealistic, is deeply interesting — because of the application of an apparently elastic, changing system that can be manipulated to a character’s advantage. It may be unrealistic, but it sure is fun.