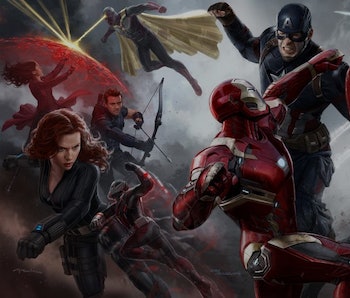 With that in mind, why don’t super strong superheroes fly backward when they punch things? If you’re talking about a 150- to 200-pound hero punching with thousands of pounds of force, how does he or she stay put when the inevitable equal and opposite force pushes back?

Professor James Kakalios, author of The Physics of Superheroes, explains it pretty simply: “The correct answer is, in fact, that they do.” Or, at least, they would without countermeasures like a shield, a super suit, or Kryptonian physiology to absorb insane amounts of force.

Forces come in pairs, so there’s no way to push against something unless it pushes back. That’s why you can punch a wall but you can’t hit air; a wall pushes back, but air moves out of the way.

Kakalios cites three distinct examples alongside force and superhero punching: Iron Man, Superman, Captain America, and the ways in which they counteract the force that physics says should send any normal human flying.

Steve Rogers’s “powers” come from the Super Serum. He’s not an alien and he doesn’t have a super-powered suit. Instead, he’s the extreme and ideal “super soldier.” As a result, he’s still fundamentally just a guy, albeit a very strong one. Theoretically, his ability to withstand the force of an object exerting its opposite force is much more substantial than mine or yours, but he’s still far from an immovable object. So why doesn’t he fly backwards when he punches Red Skull or Tony Stark?

Some of it’s about planting his feet — using his strength to balance and absorb that force and bracing for impact — but much of it probably comes down to that Vibranium shield.

“Captain America’s shield is a perfect illustration,” says Kakalios. “It’s an alloy of steel and Vibranium…and [Vibranium] has the property of absorbing all vibrations. So that makes it great as a shock absorber.”

A pure steel shield would just transmit force, but Vibranium absorbs, transforms, and redirects the vibrational energy (take the scene where Thor’s hammer hits Captain America’s shield in The Avengers, for example), and keeps it from transmitting to the arm of the person holding the shield.

When we see Cap hitting this very hard, a lot of times he does it with his shield because Vibranium absorbs vibration and force. Cap’s shield makes it possible for him to clobber baddies without suffering the ill effects of Newton’s third law.

Iron Man’s method for staying put when he delivers a crushing blow is a little bit different: It’s all in the suit.

His iconic red suit acts not only gives Tony Stark incredible strength, but it acts as armor, and helps him withstand incredible amounts of force. A good illustration? The Repulsors.

“In order to not break his wrist,” says Kakalios, “Because he’s pushing a large force out through the palm-based Repulsor Ray, so that means that there’s a recoil force — the armor, when he’s shooting the Repulsor Ray, locks in place and makes it all the more rigid. If you were to destroy one part of it, you’d have to destroy all of it.”

Superman is another matter entirely. While his outward appearances suggests that he’s a relatively normal Earth man, Superman’s physiology is fundamentally different — and it’s what makes him virtually indestructible. That indestructibility means an incredible ability to withstand force.

In the trailer for Batman vs Superman, we see Superman punch so hard that Batman goes flying, but Superman stays right where he is.

Though this can be partially explained by the upward force of Batman’s motion — the resultant force is pushing him down into the ground, keeping him anchored — much of Superman’s incredible abilities are simply about his origins. He was born on Krypton and now lives on Earth.

So there you have it: Physics dictates that super strong superheroes would and should fly backwards when punching something super hard — that is, unless they’ve got a super handy countermeasure.

More like this
Science
9 hours ago
NASA Crew-5 launch: Timeline, how to watch this historic ISS mission
By Harry Stoltz
Science
8 hours ago
5 lessons from the most iconic climate documentary of all time
By Tara Yarlagadda
Science
7 hours ago
October 2022 sky guide: 5 astronomical events you can't miss
By Jennifer Walter
Share: