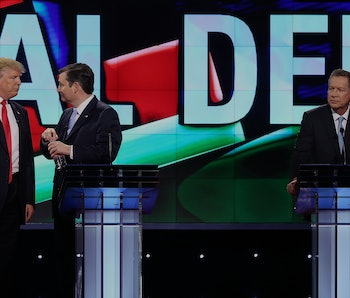 Mayor Tomás Pedro Regalado of Miami mentionned the crucial environmental issue at Thursday’s Republican debate, nothing (through moderator Jake Tapper) that the city they were currently in could eventually be under water, if sea levels continued to rise.

Marco Rubio was first to respond.

“Sure, the climate is changing … There was never a time when the climate was not changing!” he said, claiming that flooding in south Florida was due to the fact that it was built on a swamp. He said environmental regulation laws would have no effect on climate change, which isn’t a direct denial, but it’s close enough.

“As far as a law that we can pass in Washington that can change the weather? There’s no such thing,” Rubio said. “These laws that people are asking us to pass will do nothing for the environment and hurt the economy.”

Ted Cruz and Donald Trump did not face the question.

But John Kasich, alone among his peers, spoke up: “I do believe we contribute to climate change,” he said, and explained how he thought the U.S. could have their cake and eat it too, by passing environmental legislation and investing in clean energy without endangering American jobs. It’s not a passionate plea to save the earth, but on a Republican stage, it’s a start. Watch the full clip below.