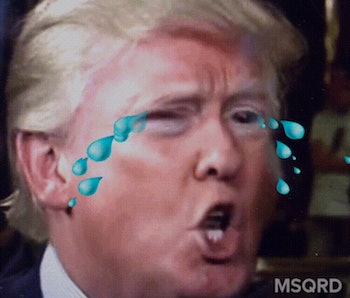 Facebook announced today it has acquired an app called MSQRD (short for “masquerade”). This app lets you place live filters over your face, enabling you to masquerade as Barack Obama, Snoop Dogg, Leonardo DiCaprio, David Bowie, Donald Trump, or Shia LaBeouf, circa 2014.

The technology will eventually be incorporated into Facebook, but the MSQRD app will continue to run independently, says Masquerade CEO Eugene Nevgen. For now, you’ll have to download the app (iTunes, Google).

Once MSQRD is integrated with Facebook, you can count on video chats and status updates getting a lot weirder better.

There’s been no word on how much Facebook spent on MSQRD. However, Facebook offered Snapchat $3 billion in 2013. (Snapchat refused, and with this acquisition, may lose its edge on Facebook if users take to MSQRD.)

To announce the acquisition, Facebook founder Mark Zuckerberg posted a video update welcoming the team to Facebook. “Hey there,” he began. “I’m just sitting here coding my little A.I. project, kinda like my own version of J.A.R.V.I.S. And no, I haven’t also built an Iron Man suit — I’m using this app, MSQRD, that lets you put real-time filters on your videos.” (Thanks for clarifying that, Zuck.)

He continued: “And today, I’m excited to share that the team behind MSQRD is joining Facebook. So I wanna offer a big welcome, guys. Alright: Now back to coding my A.I.” He then flipped his virtually rendered lid, embodying Iron Man himself. In the comments to the video, he admitted that wearing this imaginary Iron Man mask “absolutely” helped him code faster.

It is delightful and a little awkward. Watch:

At Inverse, we put this new app to the test. Can we make Donald Trump cry? Can Trump MSQRD as Obama? Can Trump not be famous anymore? Can one MSQRD as oneself? If René Descartes no longer thinks, can he still appear to exist? And can The Joker’s “Why so serious?” thusly take on a new, philosophical meaning? Does Karl Marx MSQRD? What happens when you cross Socrates with David Bowie?

“Fearing their power, Zeus split them into two separate parts, condemning them to spend their lives in search of their other halves.”

Karl Marx does not MSQRD. “If anything is certain, it is that I myself am not [MSQRDable].”

Plato is verifiably not a lover of sights and sounds.

Which Obama is the real Obama?

More like this
Innovation
6.24.2022 5:00 AM
Beam-steering radio technology could help autonomous cars finally hit the road
By Sascha Brodsky
Gaming
6.26.2022 6:00 PM
Game devs reveal 8 "extremely hacky" secrets behind Elden Ring and more
By Willa Rowe
Innovation
6.25.2022 10:00 AM
9 veggies that are healthier cooked than raw
By Laura Brown and The Conversation
Related Tags
Share: