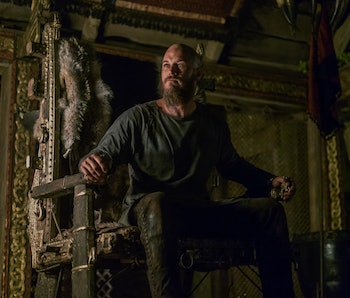 Vikings is a show filled with epic battles, sly Ragnar moments, quiet character beats, and copious ass-kicking. Each week, we’ll break down the epic, the weird, and the unintentionally goofy. Let’s dive into Season 4 Episode 4, “Yol.”

This week in Ragnar sass

The Ragnar sass levels were more verbal than his usual silent expressions, though of course, his crazy eyes remained present. Peak sass happened when he decides to free Yidu and she asks, “What about my duties as a slave?” His response couldn’t have been more Ragnar if he’d tried: Incredibly thoughtful, beneath a veneer of utter dickishness. “They were no longer wanted. You were an awful slave. I am dismissing your service.” Never change, Ragnar.

This week in ass-kicking

Bjron’s Bear Necessities adventure remains a welcome departure from his previous love triangle plots — though the end of the episode takes a concerning pivot in that direction when he reunites with Torvi, a development zero viewers were asking for.

Nonetheless, he continues to prove himself as a worthy Son of Ragnar by schooling that berserker from the last episode and laying down the law with Erlendur.

This week’s most interesting choice

Ragnar’s relationship with Yidu is revisiting a much-needed old-school Viking sensibility. Season 1, the show was a mixture of fun, enticingly exotic, immersive, atmospheric, and occasionally silly. The best episode to date is still Season 1’s Sacrifice, for how it seamlessly showed us a ritual we would normally abhor without making it lurid or sensational. The night before the sacrifice, the trippy party in the woods was moody, slightly silly, and perfectly set the stage for the eerie and stunningly filmed sequence that followed.

But for several seasons now, Vikings has lost that atmosphere by becoming too-self serious, and forgetting that characters are most interesting when they’re not talking. Dialogue has never been Vikings forte, and we’re reminded of that with clunkers like Rollo and Gisla talking about the “viking soul,” or Bjorn enumerating, in list form, the exact reasons he came to see Lagertha and Kalf. But “Yol” gets some of that elegance and mystery back in Ragnar’s trippy dance with Yidu. In true Vikings fashion, it’s a little silly, but it’s still captivating. We don’t quite know what either Ragnar or Yidu is thinking, and that’s when Vikings is at its strongest.

Worst person of the week

Kalf is such a snake. We see his machiavellian mode on full display here, as he initially blanches at Bjorn’s presence, then proceeds to hide his alarm with a calm, friendly veneer. “Bring the son of Ragnar a drink!” he bellows, sounding avuncular as can be. As if he didn’t order a Viking hitman to hunt him down. His balls are just waiting for the Lagertha treatment — though I actually hope it doesn’t happen too soon. Kalf’s politicking makes him a far more interesting villain than Vikings’s usual one-dimensional offerings, like Erlendur or Aelle. So although Kalf is a snake, he’s an intriguing one.

This week in “oh no”

It seems to be a pattern this season: that most of Vikings’ problem areas are in Rollo’s storyline. Gisla’s sudden about-face from pious virgin who found him repellant to nymphomaniac who wants to jump him all day, every day — even when her dad and entire court can hear them — is ostensibly played for laughs. And while it is somewhat amusing, it typifies Vikings’ frequent problems with characterization. I mentioned before that secondary characters have a nasty habit of turning into one-dimensional cartoon characters. By making Gisla transform so dramatically, she lost any depth she might have had. As a result, Rollo is now the only dynamic character in his storyline. And seeing how Rollo himself is making arbitrary decisions that feel out of character, merely for the sake of the plot (recall how angry he was back in Season 2 when Athelstan discarded his Viking bracelet. Now he’s suddenly cool with relinquishing his?), this is concerning.