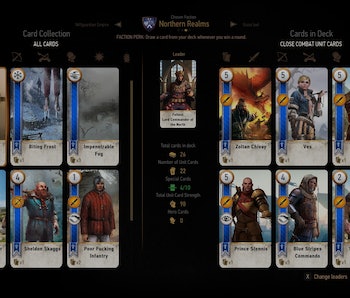 In the past few years, digital card games have proliferated online. Notably, Blizzard’s Hearthstone blew up, becoming a professional global phenomenon. Franchises like Pokemon, Magic the Gathering, World of Warcraft and even The Elder Scrolls prospered as well. Now it’s time for CD Projekt Red, the people behind The Witcher 3: Wild Hunt to put their game Gwent out there.

Gwent is a playing card game critical within The Witcher universe. Designed by dwarves and refined over the years through hundreds of tavern games, Gwent is simple to play but difficult to master. Game take place between two different players, who control a deck centered around a faction within the game – each with a different ability. Players then build their decks from a variety of close, ranged, siege, and ability cards as they see fit before diving into the taverns looking for a match.

As a mini game, Gwent is addicting. I spent countless hours myself building up my collection of cards and venturing around to beat the best players for their rare hero cards. After that was said and done, I couldn’t help but wonder what it would be like to take my decks online and compete against my friends.

The addition of an online Gwent component to The Witcher 3 would be an interesting brand extension, bringing medieval tavern culture (well, a pretend version of it anyway) online. Essentially, the games development team would have to build a server system for the tournaments and add matchmaking into the games taverns, which could be done by a new NPC present in taverns. This NPC could then match you with other players from around the world also playing Gwent and let you compete via the traditional game board.

CD Projekt Red could also develop a separate digital version of Gwent featuring the same cards that players could download to their console, PC or mobile device – allowing gamers who own The Witcher 3 to import their cards onto their digital Gwent board or encouraging them to rebuild their collection through card packs in a way similar to Hearthstone. The second option probably wouldn’t be the safest though considering their player base, but hey, who am I to judge? I’d be one of the fools paying happily for it.

Unfortunately, both of these options look like they aren’t on the development team’s radar, which is a damn shame considering how much fun it would be spending a night at the tavern with my monster deck and a few flagons of mead. That being said, we still do have one expansion coming out for The Witcher 3 this year promising a huge chunk of content. So, here’s to Blood and Wine making our dreams of online Gwent competition a reality. CD, my monster deck is waiting…