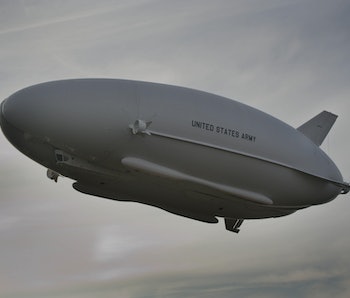 The Airlander 10, the world’s largest aircraft, is set for its first commercial test in the coming weeks. A jet and blimp crossover, the 92-meter long vehicle dirigible can take off vertically and land on any surface including water. It may top off at 92 mph, but it more than makes up for its speed with a slow and steady pace, staying in the air for more than five days at a time.

The U.S. Army originally commissioned the plane to provide ongoing surveillance of strategic locations in Afghanistan to catch insurgents gathering or placing improvised explosive devices. Since it can be flown autonomously by a pilot on the ground and uses helium to stay aloft as well as aerodynamic lift, the design is uniquely suited to long stakeouts where other surveillance planes or drones would need to take a break.

The winding down of America’s Middle East wars resulted in the Army turning over the plane for commercial sale, and after some slight tinkering, it is about ready for sale.

“We have made some modifications and converted it for civilian as well as military use, so it is a slightly different aircraft — the Airlander 10,” Chris Daniels, the head of partnerships and communications at Hybrid Air Vehicles, the company that developed the Airlander 10, wrote in a statement to CBS News. “But using the same hull material, cockpit, and engines, so 90 percent the same. We have spent the last two years preparing for returning to flight and have reached the last stages now.”

The 20-ton Airlander 10 will be available for a variety of purposes, including hauling cargo over long distances, providing long term surveillance and facilitating communications. Since the plane does not require the infrastructure of an airport to take off and land, it may be useful in delivering supplies to remote areas.

“We produce less noise, less pollution, have a lower carbon footprint than conventional aircraft, and have longer endurance and better cargo-carrying capacity than any other flying vehicle,” the company website reads.

The vehicle will undergo 200 hours of testing, then will likely be available to order, with the first Airlanders 10 coming off the production floor as early as 2018. By that time, the plane may be equipped to carry passengers, though competition against commercial jets that typically fly around 600 mph would pose significant obstacles to mass adoption of the throwback airship.

Nonetheless, Hybrid Air Vehicles is sticking with size over speed. The company has already begun planning for an even larger version of the plane, called the Airlander 50, that will be able to carry 50 tons of cargo. It’s always a tough gamble trying to adopt classic technology to modern uses, but considering the plane is the world’s largest, flies autonomously, and is U.S. Army-approved, the Airlander doesn’t need to worry about being called an antique anytime soon.