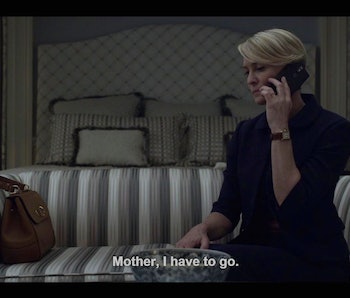 House of Cards released its complete fourth season last Friday, and the strangest twist on Netflix’s most twisted show was Washington insiders’ sudden devotion to OnePlus phones. OnePlus is a phone company based in China that markets so aggressively it publicly refers to its second model as the “Flagship Killer.” It’s murderously suitable, then, for President Frank Underwood, who’s always very attentive to his mobile.

The OnePlus 2 was equivalent to the iPhone 6s — even surpassing it in some fields, like battery and RAM, but comes at a lower price tag and carrier unlocked. And, as the OnePlus 3 is coming to America in June, the company seized the opportunity to become the official phone of House of Cards, an honor that — somewhat strangely and entirely predictably — is handed out every year.

The ambitious company reportedly paid $300,000 for the heavy product placement. All in the name of brand recognition. If that figure is correct, it isn’t arbitrary: House of Cards is no stranger to dropping technologies and other products into its episodes, and can, accordingly, name a price. Apple products appeared throughout previous seasons, and sometimes did so in hilarious abundance. Underwood himself favored Blackberrys. Not to mention the cereals, cars, whiskeys, cameras, and cigarettes that appear all over the faux District of Columbia.

And OnePlus’s gamble is paying off: If you look at Google search trends for “OnePlus” over the past week, you get the following graph:

No major spike in searches for OnePlus — though a bit of progress overall. However, if you input “House of Cards phone” into the same engine, you get a graph that tells a different story:

And, yes, they saw that coming. Here’s a graph showing searches for “House of Cards phone” over several seasons. Whatever company pays for placement will absolutely see results.

They will also see their product on a very dark screen. Here’s some of the screen time that $300 grand will get you:

That is also a OnePlus!