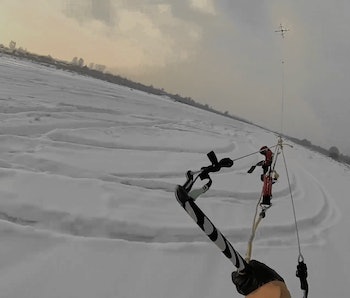 The team of Latvian engineers that announced earlier this winter that they’d built a drone capable of pulling a passenger has decided that “droneboarding” needs to be more accessible, specifically for gamers. The company, Aerones, has put out a call to design a handlebar with drone controls, a piece of tech that would unite extreme sports and video games in a bold new way.

The heavy-lifting drones the engineers at Aerones employ are capable of lifting up to 81.5 pounds, and that number is likely to keep going up. Soon we will have even stronger drones, and people will begin to dream up even crazier uses for them. Still, without relatively simple controls, it will be hard for athletes to do much beyond going very fast very quickly. That’s cool, but it’s not as cool as being able to carve across a prairie.

The interesting thing about this nascent sport is that it will actually be safer and cooler than its antecedents. Falling on a snowboard is falling down a mountain. Falling on a kiteboard is falling into deep water. Wind and gravity come into play. You can’t turn of either. A drone, on the other hand, can be controlled — provided one has the right sort of handle.

“This is another possible use for a drone. Most likely it will gain popularity,” said Ilmars Ozols, who is a member of the Latvian Association of Remotely Piloted Aircraft Systems, in a statement.

In the demonstration video, the drone pulling the snowboard seems to be controlled by someone other than the boarder, so it’s easy to see why they need a handlebar that controls the drone to make this product commercially viable.

Drones can do so much more than just take pictures, but for humans to put their trust in them, they’re going to have to feel secure. We all grew up on video games, so the controller handlebar concept definitely has legs.

Someday, kids getting pulled by drones may hardly turn an eye, though that’s pretty hard to imagine because how cool is this anklebiter?