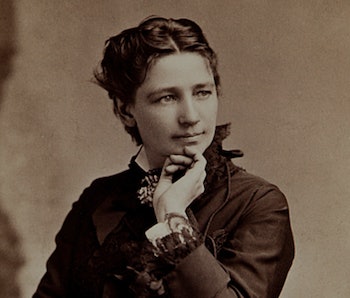 Last month, I was listening to a podcast called Laura House At Large where an LA-based comedian and a guest dig into fun deep dives, and on the episode featuring guest Riley Silverman they brought up something from American history that blew my mind and sent me down my own rabbit hole of research. This is one of those stories that makes you shout “How is that not a movie??!”

Victoria Woodhull ran for president nearly 50 years before the Nineteenth Amendment allowed women to vote in presidential elections. She ran on a platform of communicating with ghosts, and was joined by a running mate who was an escaped slave. The battle against sexism that Woodhull started fighting can be seen everywhere from Hillary Clinton’s campaign to the misogyny around Claire Underwood’s campaign in the new season of House of Cards. Allow me to share with you the mind-boggling journey of proto-feminist icon Victoria Woodhull.

Born Victoria Claflin in Homer, Ohio, she was singled out for her extraordinary intelligence as a child. Unfortunately, her family and extended family were mostly mystics and snake-oil salesmen, so her formative years were spent using this superior intellect to exploit people. At one point, her father burned down their property in an insurance scam, and when it was outed as arson the community threw a “fundraiser” to make the family leave Ohio.

The family also went into the alternative healing business, selling life elixirs, giving massages and offering cures for diseases ranging from cancer to asthma. But although Woodhull later claimed to have made a small fortune during the Civil War as a traveling medical clairvoyant, she and her sister Tennessee both had their share of setbacks. Tennessee, for example, was indicted for manslaughter in Illinois after one of her cancer patients died.

Victoria married a “doctor” who was practicing without any formal license, and divorced him after discovering he was an alcoholic and a womanizer. She re-married to a Civil War general but started her own side-relationship that led to yet another divorce. These experiences started her down the road of being a founder of the Free Love movement, because she couldn’t stand the double standard of men’s dalliances being ignored while divorced women were scandalized. She believed in monogamous relationships but did not believe she should be “owned by any one person.

“To woman, by nature, belongs the right of sexual determination. When the instinct is aroused in her, then and then only should commerce follow. When woman rises from sexual slavery to sexual freedom, into the ownership and control of her sexual organs, and man is obliged to respect this freedom, then will this instinct become pure and holy; then will woman be raised from the iniquity and morbidness in which she now wallows for existence, and the intensity and glory of her creative functions be increased a hundred-fold.”

When she began a campaign to “out” prominent men who had carried on very public affairs, she was jailed for illegal use of the postal service. There are also lots of rumors from this period that she was engaged in prostitution, but there are no facts to back this up, so maybe we can drop this from her bio at some point? Probably not necessary to keep obvious character assassination as part of her history.

With her sister Tennessee, Victoria opened a brokerage firm on Wall Street in 1870, making them the first female stockbrokers. They made an incredible amount of money, and many daily men’s journals began to cover their exploits — not as businesswomen — but by doing sketches that implied they were prostitutes but also perhaps witches. Victoria at this point had experience as a psychic medium, so the witchcraft element worked in her favor when it caught the attention of wealth investor Cornelius Vanderbilt. Who wouldn’t want to invest with a stockbroker who claimed to see the future? That’s a surefire business model.

In the same year, Victoria Woodhull used the money from the brokerage to found a weekly paper whose primary purpose was to back her in a bid for president of the United States. Feminism was the Weekly’s primary interest, but it became notorious for publishing controversial opinions on taboo topics, advocating among other things sex education, free love, women’s suffrage, short skirts, spiritualism, vegetarianism, and licensed prostitution. The paper is now known for printing the first English version of Karl Marx’s Communist Manifesto in its December 30, 1871 edition. Many of the articles were written by one of Woodhull’s ex-husbands. Mostly, this paper served to divide Victoria from the Suffrage Movement, especially since Susan B. Anthony hated her tactics.

On 1872, as a candidate from the Equal Pay Rights party, Victoria Woodhull announced her plans to run for President. There’s a lot of tricky legality here about whether or not she was ever a valid candidate, including the fact she was under 35 years of age, but she did get ratified alongside running mate Frederick Douglass — the escaped slave turned author and political hero. It was a brilliant idea to join the African American community and feminists behind a united goal of bringing equality to the US government, and Woodhull swore that there would never be an all-male government ever again.

As a medium, Woodhull often spoke about her ability to communicate with the dead, and this became the sales pitch for why men should vote for such an outspoken feminist — they weren’t electing a woman so much as they were re-electing all of the great dead Presidents who had come before. Clearly, Washington and Lincoln would speak through her, and guide this country to greatness.

If you hate women you probably like a bunch of old dead white dudes, so put your money where your mouth is and elect them again — they just have to operate with this female puppet. I wish we had footage of those debates.

Unfortunately, Woodhull’s campaign fell apart when she was arrested. Federal Marshalls grabbed her and her entire family on charges of publishing an obscene newspaper, because of their campaign to “out” a prominent minister for his many moral failings. Woodhull was in jail on the day of the election, and was released immediately after. She sued the government, and attempted to remount a campaign several more times, but the momentum was gone.

Woodhull died in 1927 in Great Britain, and has been inducted into the National Women’s Hall of Fame. The Woodhull Institute for Ethical Leadership was founded in her honor by Naomi Wolf and Margot Magowan in 1997. Many still point to her as the first high-profile supporter of sex work in America and of course the first woman to run for president — fifty years before women would actually have the right to vote. There are a few excellent books on the subject of Woodhull’s life and I’m grabbing at least one of these today.