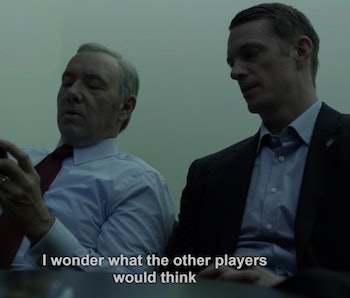 House of Cards third season is now streaming on Netflix and it’s interesting, confusing, and, of course, morally abhorrent, but it is also — in traditional fashion — a showcase for mobile gaming. In one particularly tense scene, incumbent Presidential candidate Frank Underwood squares off in Agar.io against his Republican opponent, a centrist New York Governor that probably seemed like a plausible character when the writers started sketching out the plot.

Predictably, some people thought that Agar.io was a fictional game, made up for the purposes of a slightly heavy-handed metaphor about power and politics. That is not the case, as Agar.io is downloadable for mobile devices right now — as are a host of cheap rip-off and games designed to hack the original or allow greater art customization.

So how is Agar.io? Worthy of a President? Totally. The game is pretty delightful in its simplicity.

The set up is pretty simple. Players starts as a ball the eats other balls and absorbs their mass — agar seems to refer to the stuff used to grow bacteria. Still, it’s simple concept doesn’t mean it’s an easy game. Getting any sort of footing is profoundly difficult. Winning is hard and losing is fast. I feels a bit like playing Super Meat Boy for the first time: death, death, death, death, death, small victory, more death.

The online multiplayer component means the other balls are actually live players, and there is a bizarre connectivity in only experiencing this kind of interaction in bursts of thirty seconds or so, instead of fifteen minute death matches. The game facilitates brief battles between anonymous foes. One your Agar.io opponents defeat you, they disappear into the ether — or not, you’ll never know. There’s a relief to that, to not knowing if you’re playing a president.

Agar.io is pretty much everything people look for in a mobile experience. It is very much the visually arresting multiplayer answer to Monument Valley, which Frank Underwood described so lovingly last season: “Your journey is one through a forgotten landscape of twisting staircases and morphing castles, atop floating stones defiantly crossing an angry sea, within dimly-lit caverns cobwebbed with ruins M.C. Escher could only grasp at in a dream state.”

In Agar.io, you’re bacteria. But that ain’t nothing. Every power grab starts somewhere.