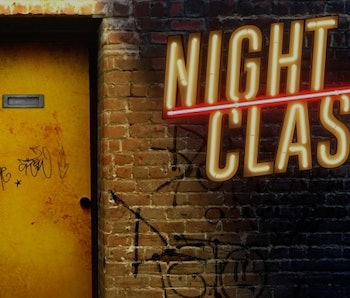 The History Channel has been deftly trying to reinvent itself lately, and its new block of late-night comedy specials, Night Class, features writing and performances from Dan Harmon and Elizabeth Shapiro. Shapiro’s show, Crossroads of History, focuses on small, seemingly inconsequential moments in history which turned out to be extremely important.

I spoke with Shapiro on the phone, hoping to discover exactly how she interacts with historical fact, both as a comedian and a writer.

How did you develop the show? What did it look like when it began?

Well, the project actually started with just the Hitler episode. The process of Hitler applying to art school, twice, and being rejected, is a period in time that I’ve been fascinated with for a while. He really wanted to be an artist! I wanted to work out my questions, as in: “Who are these people who rejected Hitler twice?” And I wanted to play with how his admittance would have changed the world. I wrote the script and got my friends together to film it.

That ended up turning out well, and because of the reception, I decided to develop it into a show. I love examining moments in history which are incredibly fateful encounters, but anyone who was actually there would have called them mundane. Here’s the thing: You don’t often know in the present that history is being made.

Part of what got me excited about Crossroads was the concept of examining history differently. Out of necessity, I had to use this microscopic focus on seemingly small events, like the 30 minutes before Lincoln was shot. I’ve been given this wonderful opportunity to look at history in a new way, while also teasing out the comedy and dramatic irony. My characters have no idea that their moment is consequential.

Is it easy to find comedic material in historical texts, or do you have to use your imagination?

There’s no shortage of these moments, and so far I’ve really enjoyed finding them. In each episode, there’s a bit of karmic writing — catharsis — because I have this ability to tell the story from a new angle. Our second episode is the assassination of Abraham Lincoln, like I mentioned. We know from historical text that Lincoln’s bodyguard was a raging alcoholic who left his post at intermission to go get a drink in the bar next door where John Wilkes Booth was getting a drink, trying to find liquid courage for what he was about to do.

Wait — whoa whoa — I did not know that. That’s insane!

Yeah! Some people have been elemental to historical movements, like this drunk cop, and for whatever reason we’ve forgotten about them. Like, why couldn’t anyone have seen that coming? Entrusting this guy who was a raging alcoholic —with all kinds of infractions on his record — with the safety of the president. He just kept failing upwards, if you look at his records.

This was before the Secret Service, so he was basically a D.C. cop. Of all the cops from D.C. on the force, they picked this guy for the president.

So, my favorite story about this guy, John Frederick Parker, is that he was once found passed out on a trolley car. They bring him into the station, and his boss is like, “Why were you passed out on public transportation?” His excuse was, I kid you not — I couldn’t make this up because it’s too delicious — that he’d heard ducks quacking on the trolley, and he’d gotten onboard to inspect the situation. For some reason, his boss was like, “Sounds good to me! Good work, Parker!” and promoted him. Sometimes there’s just a trainwreck coming, and looking back we can see the pieces falling together to let it happen, but no one caught on.

That’s a crazy detail. How do you find this stuff? Can you describe your research process to me?

Working at the History Channel, we were lucky to have some historians who were consultants, and they were really helpful. Mostly, I found the moment first, and then asked people to help me research and build out around it. We’d have to figure out that time period, the events leading up to it, the characters involved, what it looked like. It’s a little ephemeral. I wish it was a more glamorous process.

No, that’s great! So you were synthesizing sources.

Well, yeah. My aunt is a historian and she told me about the bodyguard, so I got that story from her and wrote around it, developing it. We don’t typically talk about tiny moments when studying history, it’s more about large movements, so I had to do some detective work fleshing it out. I read a bunch of alternate history texts — they often take an important moment and deconstruct what it might have looked like, in an immersive way.

It must be exciting to write late-night comedy for a network that hasn’t produced stuff like this before.

I mean, I’m super excited! Fortunately for us, maybe not fortunately for humanity, history is filled with material for comedy. I think it’s incredible to be a part of this Night Class block. And, oh my god, to have a show next to Dan Harmon? Craig Ferguson? I’m surrounded by these brilliant comedians: It’s wonderfully surreal. I think that the fact that they’re allowing us to push the envelope and reach for an audience that’s obviously into history but also wants an edgier voice — and comedic material, which is what I enjoy. It’s really been wonderful.

Crossroads of History airs on the History Channel Thursday nights at 11:30.

More like this
Culture
6.26.2022 12:30 PM
40 years, The Thing set a new standard for sci-fi thrillers — and accidentally inspired a modern movement
By Andy Crump
Culture
6.21.2022 7:55 PM
You need to watch the most nostalgic time-travel movie on Netflix before it leaves next week
By Jake Kleinman
Entertainment
6.27.2022 1:00 PM
The oral history of Face/Off, Nicolas Cage’s inexplicable sci-fi masterpiece
By Ralph Jones
Related Tags
Share: