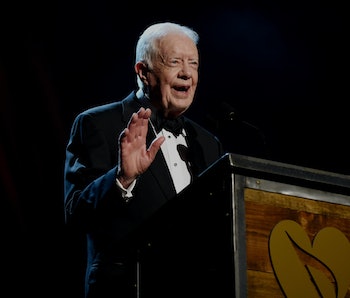 Former president Jimmy Carter announced Sunday that he’s stopping treatment for his brain cancer at the ripe age of 91. Inspiring as his story is, it’s hard not to wonder: how’d he do it? Turns out Carter was being treated with Keytruda, a new and highly promising immunotherapy drug that was approved not long after Carter was diagnosed.

In August 2015, Carter announced that his aggressive melanoma — a deadly form of skin cancer — had spread to his brain, and it seemed pretty clear that he had only a few weeks left to live. Still, he underwent treatment at Emory University’s Winship Cancer Institute, where traditional tumor-killing strategies like surgery and radiation were used to kill cancerous cells in his brain, together with doses of Keytruda, which he received every three weeks.

Since Carter announced that he was cancer-free back in December 2015, American cancer patients have been clamoring for the drug. Keytruda, which was approved by the FDA for treating advanced melanoma in 2014 after being sped along by the agency’s accelerated approval program, works by helping the body’s immune system carry out its normal function of killing off cancer cells.

This isn’t easy for the body to do when it’s wracked with cancer. Using a protein called PD-1, cancer cells evade the immune system’s surveillance — allowing them to spread and proliferate undetected. Keytruda blocks the PD-1 pathway, preventing the cancer cells from hiding and thus letting the immune system do its thing.

What’s especially promising about Keytruda is what seems to be the general mildness of its side effects. Carter reportedly experienced only a few of its effects, which include the usual fatigue, cough, and nausea and, on the more severe end, immune-mediated effects on healthy organs like the lung and colon.

Still, it’s far from perfect. One clinical trial showed that it is only effective in a quarter of patients, and it’s currently at the center of a heated debate in New Zealand over whether or not it’s worth government funding, given its limited effects.

The drug, considered to be pharmaceutical giant Merck and Co.’s most recent blockbuster product, is only approved to be used for certain advanced kinds of cancers; in addition to advanced melanoma cases like Carter’s, it’s also used to treat non-small cell lung cancer that resist chemotherapy involving platinum. Its limited applications didn’t stop it from making roughly $566 million for Merck last year worldwide.

Not all physicians are sold on its efficacy — it’s possible, of course, that Carter’s radiation treatment was enough to do the trick — but there’s little doubt that Carter’s highly successful — and highly public — treatment will continue to drive up America’s demand for the drug.

More like this
Culture
17 hours ago
Lost Never Solved Its Weirdest Sci-Fi Mystery, But This Episode Came Close
By Jake Kleinman
Culture
Feb. 4, 2023
The End of the Cold War Could Have Killed James Bond. Instead, it Made Him Stronger.
By David Grossman
Science
Feb. 4, 2023
How Scientists Decide Whether Everyday Products Could Cause Cancer
By The Conversation and Brad Reisfeld
LEARN SOMETHING NEW EVERY DAY.
Share: