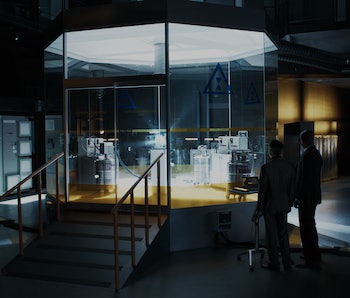 Quantum Break, a third-person shooter coming to the Xbox One on April 5, wants to be more than a game. Instead of just cutscenes, Quantum Break features a live-action “season” of TV that furthers the story in between acts. Players shoot up evil mercenaries with time-warping superpowers, then sit back for a 22-minute episode that reflects the repercussions of their critical in-game decisions. It’s mixed media, its bold, and it was a lot of work to put together. Stitching a game into a drama is tough work. Consistency is critical. Tone is critical.

Enter John Kaefer. A veteran of TV and movies — he served as a composer for years on Good Morning America and, on a different note, wrote music for the 2007 flop Mama’s Boy — Kaefer was charged with making the scenes in Remedy Studios’ live-action show cinematic, while reiterating the players’ connections to their characters, rather than turning button mashers into passive watchers. Inverse sat down with Kaefer to discuss how he orchestrated the experience, and the ways that sound can help a game and a show become propulsive.

Walk me through the process of composing Quantum Break. How did you score the series knowing it was also part of a video game?

I wanted to get to know what the game was like, how it was built, and the sound of the music from the [game] composer [Petri Alanko]. I was provided with materials; I studied. From that point, I consulted with the production about the direction they were looking for. I worked with the production company Lifeboat for Sequestered, that’s how I got on, and the sound was built from talking to the director and the team hearing what they had to say.

Was it difficult to achieve the feel and atmosphere when you weren’t the only person scoring?

The production team gave me a good idea what they were looking for, which happens to be a comfortable style I write: ambient drone, electronic acoustic hybrid. I was comfortable. The process from my end [was] seamless. What I wrote, they liked. I think they took me in because of that, they knew I could adapt into that style.

I did listen to the actual game [soundtrack] and I listened to other projects from Remedy. Cliff Martinez is influential, and [series] director Ben [Ketai] also likes his work. I do have a classical background, the elements I take from that [is] the idea of minimalism and long, evolving textures. I figure out ways I could layer textures and make evolving sounds. Things change, but you can’t necessarily hear how. They change over time.

The vibe that was described to me, and made sense while I was writing, was to do a moody score in a style to what I had. Everything seemed organic. How that fits into the overall score of the game I’m not entirely sure.

What can we expect from the show? Is it necessary for us to play the game to understand it?

I think it can be watched on its own. [But] it’s meant to be all together. It looks great, the acting’s fantastic, it’s exciting. I think it could be a great standalone, but the plot makes more sense if you’re involved in the game. It’s a cool thing.

How much of the game did you experience? Did you play it?

I was provided with some scenes and musical references, since my old work on the score for the game was also being done at the same time. Once again, there was a separate production team for the series. I work with my people, the director Ben Ketai is awesome and gave great insight. We really approached scoring the TV show from my point of view.

Does that mean the live-action and video game teams of Quantum Break were on their own islands?

I wouldn’t say that, I just wasn’t involved. There were always people from the game [with us]. On the whole, of course there’s very strong, important integration between the show and the game, it’s just I wasn’t involved in those decisions.

You say Quantum Break fits your style but it sounds different from your previous work like Sequestered. Is Quantum Break indicating a new direction?

It represents what I’m looking to do. For my composer ear, I hear everything connected. Other people might not, but I hear connections and the roads leading to it. Quantum Break represents the place I want to go. I love combining traditional instruments and doing strange things with them. Quantum Break features instruments that are bowed, and I like taking those and combining it with emphasized electronic elements. It is modern scoring, but I like combining my classical side and putting it into my work.

What was your favorite scene to score in the series?

The last episode. There were two scenes, actually, [but] I can’t give away any of the plot. But just in general, in the first episode there’s a cool chase scene that was just really fun to write. The last episode was really fun, really challenging. It’s a culmination of different elements coming together and there’s these different branches of how it went.

Quantum Break has branching stories based on player decisions. What was it like to sort of “re-orchestrate” scenes to different outcomes?

What do you hope is next after Quantum Break?

I would love to do more games. I enjoyed the experience. I love working in television, besides Sequestered I’ve been involved with TV for ten years. I love the challenge of finding the sound for a show, I actually like the deadlines. They tend to be tight, it can be intense but I like that rush. I like to push myself a creative level.

Will you play Quantum Break?

I am absolutely 100 percent playing Quantum Break, I can’t wait. I’m not sure I consider myself a gamer, I’m writing constantly. It’s hard to sit down for a period of time. I’m going to make time to play it, because I want to see how it all fits together.