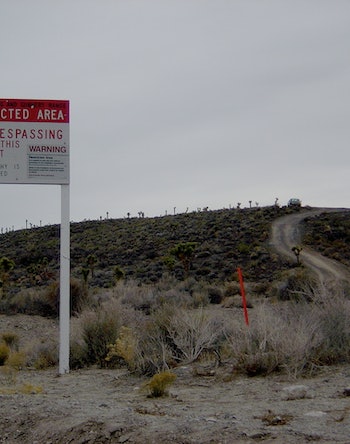 Hans Faulkner traveled to the Nevada desert in August 2015 with one thing on his mind: Aliens.

Faulkner wanted catch a glimpse of Area 51. He was working on a documentary project about advanced aircraft — and possibly alien — technology. While he was there, he explored the area up to the posted warning signs, and sent up a drone to capture some pretty amazing footage. “Approaching Area 51 you wouldn’t know anything was there,” he tells Inverse in an email. “Its location is perfectly hidden behind several mountains.”

The drone enthusiast recently posted several videos to his YouTube channel, recorded from various locations during his trip to the area. His visit was just in time — the very next month new signs were posted in the area, prohibiting the operation of drones.

So sneaking a peak of the top-secret military base, widely rumored to hold evidence of extraterrestrial life, just got a lot harder.

The best remaining legal view is an hour’s hike up Tikaboo Peak, 26 miles from the base.

Faulkner says he was compelled to start researching aircraft technology after a “dramatic experience” in 2001:

“I was driving East on I-70 through Missouri,” he writes. “It was around midnight, when I noticed a ‘craft’ hovering over my car. I slowed down, and took a mental note.

“It was a large disc shaped craft and had a green light that slowly pulsated. When the green light flashed I could see metal panels underneath. It was large and moved west very slow. As it traveled over my car, I rolled my window down and looked directly up at it. It didn’t make a sound. No sounds from helicopter blades and no sound of an engine.

“I was in shock, I drove about 10 miles before I turned around and drove back to get a another look, I never saw it again. I didn’t think it was alien, I thought ‘what an amazing machine.’

He adds, “At least aliens weren’t my first thought.”

In addition to the Area 51 footage, Faulkner’s YouTube channel features footage that claims to show aliens and UFOs. The most popular video (seen above), with more than four million views, shows brief footage of a prototypical alien form — a naked, grey, humanoid with a skinny body and large head. The footage was taken in 1987 at a secret military base involved with the testing of aliens, according to captions within the video.

Faulkner says he’s on the fence as to what secrets might be hiding at Area 51. ”The Roswell New Mexico story is very compelling. However, I can’t say I’m totally convinced aliens are hidden at Area 51.”

During the trip he saw a lot of empty desert, some distant shots of military buildings and infrastructure, and a black jet flying over the base. The whole experience was “interesting, and somewhat eerie at first,” he says.

Area 51’s borders are mostly unfenced, although armed military personnel watch them closely — and they have a license to kill. It’s worth noting that even with a drone, the best footage that Faulkner was able to capture of the main base is distant and hazy.

With the new no-drones-allowed rules, alien hunters will likely have to wait until Google updates its satellite imagery to unfurl some more secrets of the highly-secretive base.