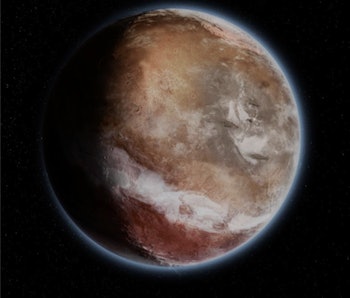 About 3 billion to 3.5 billion years ago, Mars wasn’t the red planet we know. Its poles weren’t where they are now. Its rivers and ice sheets were located in different regions. Its crust buckled and twisted in unfamiliar ways.

Then a massive volcano erupted. For several hundred million years, the volcano’s explosion continued to fuck up Mars’ shit and voila — we got the planet we have today.

When the Tharsis volcanic dome (the largest in the solar system) erupted, the surface of Mars tilted by a staggering 20 to 25 degrees, says a new study published in Nature. Imagine a piece of fruit like peach or apricot, in which the skin and flesh rotates around the inner core. The same thing occurred in this instance — the crust and mantle of the red planet’s geology literally rotated around the center and irrevocably altered the course of the planet.

Among the consequences: Martian rivers formed in different places than they would have; underground reservoirs of water ice shifted far away from the poles; the Tharsis dome itself relocated closer to the equator.

The French team who performed the research were following up on a 2010 study that suggested the removal of the Tharsis dome would result in a radically different geological orientation for Mars. The researchers went a step further and calculated how this would have affected river and glacier distribution using new kinds of climate models. They concluded that the Tharsis eruption prompted the existence of Martian rivers — since the direction of water flow is controlled by the axis shift.

This has some major implications behind the history of liquid water on Mars — and more importantly, the possible formation of life on the red planet. Any scientists searching for evidence of past life on the red planet will need to take into the Tharsis-triggered shift in tilt when considering the short window of habitability.

More like this
Science
8.10.2022 3:00 PM
Asteroids may have carved Earth's landforms as we know them — study
By Doris Elín Urrutia
Science
3 hours ago
Ancient chicken bones and snail shells date the destruction of a Greek city
By Jennifer Walter
Science
8.14.2022 9:00 PM
Ancient lore reveals how warriors manipulated their enemy’s senses in battle
By Adrienne Mayor and The Conversation
Related Tags
Share: