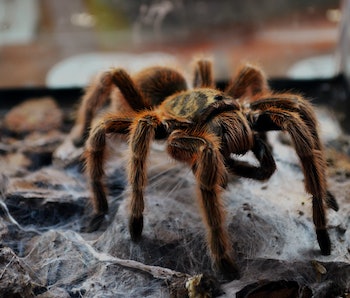 Harpooning your enemies is an effective way to take them down, but harpooning them with a venom-tipped spear is even better. Vengeful and resourceful humans have long known that the venom from certain tarantulas, snails, and snakes can shut a person down for good. What we didn’t know until recently is that, in smaller doses, it can shut down our capacity to feel pain.

We can thank a research team at Yale University for discovering in 2014 that venom from the Peruvian green velvet tarantula, in particular, is a natural painkiller. Following up on that research, scientists from the University of Queensland have figured out how exactly that venom works on pain-sensing cells, and their findings have major implications for designing future pain-killing drugs.

Tarantula venom numbs pain when it latches onto a pain receptor — a protein “hook” — on the surface of certain neurons, blocking its ability to tell the brain that something is hurting. Looking more closely, the researchers, publishing thei results in the journal Cell, found that the surface of that cell draws one specific part of the venom, a molecule called ProTx-II, toward it. Pooling together a bunch of these molecules in a cloud around the cell’s surface ultimately makes it easier for the cell’s pain receptors to hook them tightly and thereby numb pain.

Knowing how this works can help researchers design drugs that act like tarantula venom and share its pain-killing qualities — but aren’t actually tarantula venom. Harvesting enough of it to treat a nation in pain would be impossible, and the side effects — like, say, skin rashes and difficulty breathing — are no fun.

Today, in moments of extreme pain, we turn to drugs like OxyContin, Percocet, and Vicodin. Unfortunately, because they’re crazy addictive and easily abused, they’re not exactly safe — according to the CDC, we’re in the middle of a prescription painkiller overdose epidemic — so finding a painkilling alternative that won’t kill 44 Americans a day is a pretty high priority, even if it means milking creepy AF arachnids for their poisonous insides.