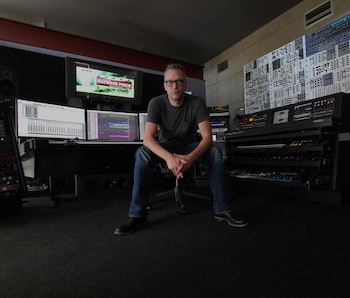 During his six-year run as the keyboardist for the industrial rock group Nine Inch Nails, Charlie Clouser worked constantly with mechanical sounds and melodies. In his compositions for TV shows like Wayward Pines, the musician and composer takes a different tack.

“I find myself using less high-tech sounds and more organic acoustics that I can trash using effects on the computer,” he explains. “The amount of time I’ve spent with electronic sound — I feel is not as fresh and exciting when I’m writing the music and trying something completely new.”

From 1994 until 2000, Clouser rocked as NIN’s keyboardist for the albums The Downward Spiral through Things Falling Apart. He also worked as a remixer for the biggest names in ’90s metal: White Zombie, Rammstein, and Marilyn Manson. Clouser got dark and he stayed dark — he’s still known for the moodiness of his music. Fortunately, in the age of serious TV, that dark is marketable. Clouser, who worked as an assistant to a soundtrack composer before NIN, resumed composing by working on NBC’s Las Vegas and the horror franchise Saw. Today, Clouser works on Wayward Pines, Fox’s thriller about a sleepy mountain town hiding a dangerous secret.

Inverse caught up with Clouser talk about his approach, what fans can expect from Wayward Pines Season 2, and what he misses about being a rock star.

Was there anything you had to relearn when you made your transition from rock bands to soundtracks?

I don’t know if there’s much relearning as opposed to repurposing and reprioritizing what you spend time on. In Nine Inch Nails, we spend endless amounts of time searching for sounds never heard before and ways we could take things to unachieved levels of sonic manipulation and destruction.

It’s been nice with the stuff I’m doing with scoring, it can be simple and you don’t have to turn over every rock in the garden looking for a lizard that man has never seen before.

What inspires your work on Wayward Pines and your overall sound?

After 30 years of fiddling with synthesizers, I find myself more attracted to heavy manipulation of acoustics. Wayward Pines wants to sound creepy, but the show is not high-tech, it takes place in the natural world with biological entities. I used a lot of guitars, a lot a bowed instruments, using the bow to play a piece of scrap metal or metallic instruments that sound unusual, but aren’t high-tech. I characterize sounds I’m using as sounding like they’re outdoors, like big drums, or indoors and claustrophobic, like the sounds you’d find in Saw or where things are in a dungeon or small room. I try to make the evocative quality fit with the space the story is taking place. So Wayward Pines winds up being unsteady and uncertain that comes from an acoustic and organic footprint.

What are you intending to do differently in your approach to the music this season?

Definitely building on the foundation from the first season. In the first season the score started out not epic or bold in the first couple of episodes, [it] was uncertain and wobbly as Matt Dillon’s character gets his strength back and starts to uncover what’s going on. That reveal has already been done, so at this point it’s going to be more focusing on the subterfuge and what’s likely present and not so much misdirect like I did the first season. I won’t be able to play that trick again. I’ll have to rely more on following the storyline [of] the next generation of Wayward Pines, how they make their way in the screwed up world they live in.

Do you prefer working with synthesizers or acoustics?

Obviously the world of synthesizers is a wide open spectrum of sound. [But] having some piece of metal or a broken cymbal from a drum kit make an interesting sound if I play it with a violin bow, that’s something new I haven’t heard before. Maybe other people have, [and] that helps spur on the creative process that might not happen if I’m sitting behind a synthesizer I’ve used a zillion times and know what type of sounds it’s likely to produce.

What was your favorite scene to compose in Season 1?

A big payoff for me was, spoiler alert, when Matt Dillon’s character saves the day and meets his end in the elevator shaft. It’s technically an epic destruction scene where he’s being attacked from all sides, but musically the score turns off all the energy and turns emotional. It’s this poignant scene where he’s going to do the right thing to save his family and save Wayward Pines.

Talk to me about the construction of the Wayward Pines theme song. It’s got a unique flavor from other TV shows out right now

I was trying to make the illusion of this placid mountain town. It doesn’t have any sort of menace or heaviness or darkness. I was trying to give the impression there’s something wrong under the surface, but not hint at this epic storyline that spans thousands of years of and involves mutations. I was working very much from the visual elements put together in the title sequence, the model of the town, almost a diorama or a model train set. There’s this facade of a peaceful rural town, that something’s not right behind the surface and if you look closely you realize it’s all made of illusion and papier-mâché. I didn’t want to hint at epic violence and zombies deep down. I wanted to create an unsettling illusion of this town that’s got a few screws loose.

Taking a step back, what’s been your favorite memory that stands out throughout your whole career?

Nine Inch Nails did a tour with David Bowie in ’95. We had done preparation separately and we were going to meet with Bowie in New York for final rehearsals. We all arrived at the SIR rehearsal studio in Manhattan. This was the first time I ever met David Bowie and his band, Mike Garson and Reeves Gabrels, people I was a fan of. David’s very disarmingly casual and cordial and very informal, and we walk into the room and, it was a cold day in Manhattan, we’re all bundled up carrying bags. We walk in and David said, “Oh you’re here! Great, let’s run down our version of ‘Hurt.’”

As we’re standing there, we haven’t even sat down yet still holding our bags and undoing our scarves, they began playing this achingly heartbreaking version of [Trent Reznor’s] song. We were all riveted hearing our childhood heroes play a song we knew well but was being put into a new light and taken to a new level. I remember them running through the whole version and as they came to the end we were all still standing there, riveted in place by seeing our heroes play a song that was very well-known and near and dear to our hearts.

More like this
Entertainment
5.12.2022 6:34 PM
The secret reason Christopher Walken was destined to play the Emperor in Dune: Part II
By Ryan Britt
Gaming
5.3.2022 11:00 AM
Spotify Island brings a “paradise of sound” to Roblox players
By Mo Mozuch
Entertainment
10 hours ago
Ant-Man 3 leak reveals what makes Kang a bigger threat than Thanos
By Alex Welch
Share: