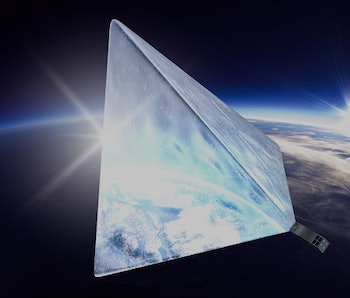 A team of scientists and engineers from Moscow University have a luminous goal — they want to build the “brightest star” visible in the night sky. Okay, it will actually be a reflector satellite, ambitiously fundraised for via a crowdfunding campaign, but because of its solar-synchronized design it’s likely it will still look far brighter than any star to us.

Introducing: Mayak, which translates to “beacon” in English. The group has already raised $23,000 from 1.5 million contributors to build the 16-square meter tetrahedron Mayak, which is being promoted as some sort of space “lighthouse.” (For all the spaceships wandering in drifting in the dark.) The satellite would essentially reflect the sun’s rays back to Earth as it orbits the planet.

According to a Google-aided translation of the description on Boomstarter: “You will be able to say: ‘This star lit me!’”

The group has also developed a mobile app that will automatically locate Mayak in the night sky at any time. There are also other goals behind the project, including (in order of increasing absurdity) constructing a model that can be donated to the Museum of Cosmonautics in Moscow, and constructing a new kind of braking system to help Mayak and other satellites re-enter the atmosphere (as well as help in the remediation of orbital debris).

The Mayak team also says on the crowdfunding site that Roscosmos (Russia’s state-run space agency) has expressed interest in possibly launching the satellite up on a Soyuz-2 rocket sometime in 2016, alongside a payload carrying another satellite meant to monitor Earth for forest fires.

Crowdfunding is probably the best and worst thing to ever happen to space exploration.