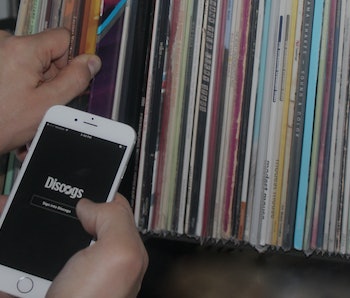 Discogs.com has been the primary online destination for both consumers of physical recorded music and simply detail-oriented music fans alike. Visitors and users can not only get good rates and compare prices for albums in which they are interested, but they can also check detailed credits and release information. The Discogs universe also extends far beyond what’s available on Spotify or Apple Music: You can determine what an album’s original release runs versus its reissue, the country of origin of odd pressings, the quality of the fidelity, and so on.

The lot of the LP, CD, or tape collector has traditionally been defined by carrying around little scraps of paper with desired albums in one’s wallet, maintaining a Word doc with every album one owns alphabetized, and other fussy, often paper-based rituals. This week, Discogs released a free app for iOS that has the potential to alleviate these stresses and anachronistic methods, and offers functions that its traditionally non-mobile-friendly, relatively primitive site does not. Here are its most important functions:

The “Wantlist” function provides you with an easy-access, annotated catalog.

Instead of the scrap of paper, you can pull up Discogs’ annotated listings on the albums you are looking for when you head to a record store, and figure out if the store is trying to put one over for you by comparing seller rates (alert, NYC record hunters!) No more paying $30 for ubiquitous Fleetwood Mac records or something that should reasonably go for $10 or less; popular should not and does not mean pricey. You can blame record stores for trying to milk tourists — times are hard — but this app could save wannabe collectors hundreds of dollars.

A barcode search function will automatically bring up a record in its catalog.

So, you see a record you’re interested in and want to get all the pertinent details: Is this the right price? Is this a reissue or an original? Is this record even supposed to be good? Part of the fun of going to record stores is taking a chance on something unfamiliar; now you’ll be able to take slightly more educated chances and making better use of your limited funds. Sure, some of the adventurous and reckless abandon will be gone, but you can doubtless get more bang (that is, records you’ll actually listen to a lot) for your buck. If you take a picture of a record’s barcode on your phone, Discogs will scan its archives for it and pull up information on the album.

The barcode search function will also allow you to compile your entire catalog without typing anything. You can rate all your records for the good of the community, and in case you need to remember which ones you like and which you don’t (as in, need to sell).

A possibly adverse effect is that this app will keep people out of the record store, furiously checking their phone and bidding or quickly ordering vinyl, CDs, and tapes they’re interested in. Of course, for stuff that’s hard to find, it’s just an easy way of grabbing something even faster, before you forget you’re interested in it.

It’s unclear how well the Discogs app will do, and whether or not it will encourage record buyers to get lost in their phones, or just be a convenient supplement to their current routine. Either way — given the fact that Discogs is the album buyer’s most essential resource — it’s bound to make a significant splash on the community to which it’s catering.

More like this
Innovation
6.24.2022 5:00 AM
Beam-steering radio technology could help autonomous cars finally hit the road
By Sascha Brodsky
Innovation
8 hours ago
Can cars run on water? The science of a TikTok conspiracy theory, explained
By Andrew Moseman
Innovation
6.27.2022 8:00 PM
Artificial photosynthesis can grow plants without light — and may solve a planetary dilemma
By Steph Lee
Share: