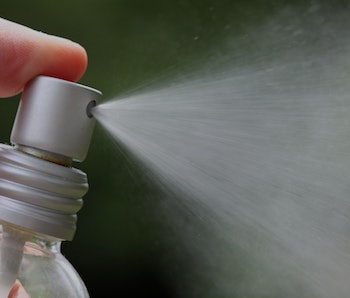 French insurance saleswoman Katie Apalategui was overwhelmed with how much she missed her late father. When he died eight years ago, what she found herself missing the most was his smell. So she teamed up with the macromolecular organic chemistry unit of the University of Le Havre, signed her son up as her business partner, and launched Kalain — a company that provides the olfactory links to the ones you miss most.

Kalain sells two box scents — one designed for a “temporary absence” like a long-distance relationship and one for a “definite absence” a.k.a. the deceased. It costs $609 for either. To kick it off, the client sends Kalain a piece of fabric or article of clothing that the person — or animal — they miss has had a lot of contact with. The bottle of the chemically engineered scent is only 10 milliliters, which is about the size of a small dropper of eye drops — Kalain emphasizes that they’re making scents to enjoy once in awhile, not perfumes to wear.

While certainly expensive, the scientific backings behind Kalain isn’t a gimmick. Smell is a particularly important sense for humans when it comes to memory triggers — scientists agree that odors have the capability of vividly triggering the recollection of autobiographical experiences, commonly called the “Proust phenomenon.”

When you sniff something the organic molecules hit the receptors in your nose and travel up to a neural structure called an olfactory bulb. Some of these signals go the primary olfactory cortex and others go straight to the hippocampus or the amygdala — the bits of the brain that are relevant to emotion and memory.

It also makes sense of the smell of parents to affect people most strongly. While most visual and verbally-cued memories come from people’s twenties, the peak time for smell-induced memories is at age five. Researchers have found that memories from childhood are much more clear than later remembrances — predominantly because of the role of smell during this time.

Smell is such a powerful force because it affects our survival — it regulates the behaviors that are going to keep us alive. While a process called retroactive interference causes new memories to switch out and change old memories, this phenomenon apparently doesn’t affect memories that are triggered predominantly by a smell.

Also necessary for survival — being able to move on when the people we love most are gone. Whether it’s holding on to an old sweatshirt or having a vial of scent engineered, having that smell is a way of remembering.