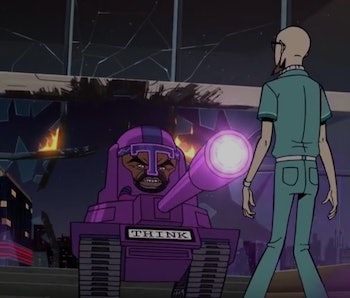 Last night’s Venture Bros. developed the Monarch as Blue Morpho, and manipulated Brock’s sexuality in an interesting way. Blue Morpho has now become relevant to the Guild, and to Dr. Mrs. The Monarch, who hasn’t yet discovered that the renegade villain killing other villains is actually her husband. What made this comedic setup so engrossing was the show’s use of digital animation, a tool it has improved over the years.

The multi-car chase scene felt more arresting in this episode than it might have been if enacted using the show’s old style, and the reveal that Blue Morpho’s car can actually fly looked just as revolutionary to us as it did to the characters. The Venture Bros. has always demonstrated a mastery of its crowded stage, writing quick dialogue that allows each of its crowd of characters to have agency and individual objectives. Its improved animation will allow the show’s keen eye for detail to extend to complex action sequences, which is what Venture Bros. has been striving for since its beginning.

On the other hand, Brock Samson’s slow development into a subordinate lover for Kate McKinnon’s Wonder Woman spoof “Warriana” doesn’t quite fit the background Venture Bros. has established for Brock, who is probably its most iconic character. Though Brock has certainly been taunted by his attraction to certain women in the past, his romance with Warriana is supposed to put his masculinity up for debate. He asks her if they can not do “butt stuff” tonight, and after she wraps him in her lasso of truth, he exclaims, “I liked it!” Maybe this dalliance with Warriana will end in a complication of Brock’s masculinity, and demonstrate that he can still be the ridiculous, naked assassin soaked in another man’s blood and still be the sub to Warriana’s dom. Or maybe it will just be a running joke that Warriana’s influence has power over him.

Who knew when the show began that the Monarch and Dr. Girlfriend’s marriage was going to become the show’s emotional core? Now that Blue Morpho has gone public, The Monarch stands to lose his wife (again), and that possibility actually has stakes for the viewer. We’ve seen The Monarch and Dr. Girlfriend (through flashbacks during their Guild interrogation) grow as a couple, changing to support each other and compromising. They’re both capable of more emotional maturity and pliability than any of the show’s other characters (save maybe Henchman 21), so their bond being unstable feels like a problem worth solving.

All in all, the show has become slightly more mainstream in its structure — last night’s episode, for instance, had a classic inciting incident in both plot lines. After the plot lines converged for a climax, the episode ended on a cliffhanger — but it hasn’t lost its wit or subversive take on heroism in the process. This is turning out to be a fantastic Venture Bros. season.