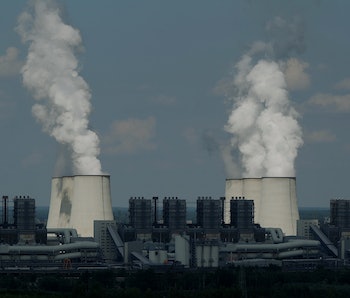 Green energy advocates in the United Kingdom and around the world received some unexpected good news on Sunday, when longtime fossil fuel fanboy, the trade group Energy UK, announced it had effectively switched sides on several key energy issues. It now opposes the continued use of coal-fired power plants and has pledged to campaign for low-carbon alternatives.

Energy UK represents the “big six” energy providers in the United Kingdom. It has long played a role similar to big energy in the United States, acting as “merchants of doubt,” to borrow the title of the documentary about those who obfuscate and debate the science of climate change to further an economic agenda. But that seems to have all changed.

“No one wants to be running the next Nokia,” Energy UK CEO Lawrence Slade told The Guardian, citing one of the more embarrassing cases of a company that failed to adapt with the times. “I want to drive change and move away from accepted (old-style) thinking.”

The debate over climate change itself may not be quite as vociferous in the United Kingdom as here in the United States. However, there are still plenty of disagreements on exactly how the nation should confront the global environmental challenge. The UK remains invested in the use of coal-firing power plants, and it recently slashed subsidies for wind and solar energy.

Energy UK now opposes both of these policies, arguing for the phasing out of coal-fired power plants and encouraging green energy subsidies in its “Pathways for the Great Britain Energy Sector to 2030” report. The report even goes so far as to push the United Kingdom to adopt a national energy policy similar to Germany’s plan to ditch fossil fuels mostly altogether.

The announcement earned the group a skeptical but grateful welcome to the ranks of green energy advocates. Catherine Mitchell, a professor of energy policy at the University of Exeter, told The Guardian:

Energy UK is the conventional industry lobby, and is generally at the conservative end of arguments. This [Pathways] report reads almost as if they have “flipped” to the other side. I take this to mean that their members realise that their future is in the “new” energy system rather than the “old,” and this is to be welcomed.

Such a reversal is the dream of green energy advocates in the United States who have faced some of their most ardent opponents in the fossil fuel industry. “Big Oil” has long been accused of fomenting opposition to efforts to wean the United States off its fossil fuel dependency through political campaign donations and shaky science.

The Keystone XL pipeline, the recent 195-nation climate deal in Paris, and President Barack Obama’s executive actions on power plant carbon emissions all continue to divide green energy advocates and fossil fuel supporters. While it may be hard to imagine a truce between the two sides, let alone a real reconciliation, Energy UK’s about-face certainly suggests that the demands of the future may require converting old foes into new friends.