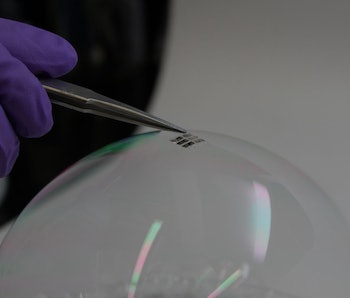 Look at a strand of your hair and examine its width. Now imagine something only one-fiftieth as wide — that’s how thin this solar cell is. A new invention from MIT, it’s the thinnest, lightest solar cell ever been produced. It’s so damn thin, researchers float it on soap bubbles to show off.

The researchers behind the cell say it could be put on anything — a smartphone, helium balloon, a space craft, paper. If it’s not clear why you may want to put a solar cell on paper, MIT offers this response: It’s not the researchers’ job to limit the cell’s possibilities. You do you.

“It could be so light that you don’t even know it’s there, on your shirt or on your notebook,” MIT professor Vladimir Bulovic, the lead researcher, said in a news release. “These cells could simply be an add-on to existing structures.”

Bulovic and his team published their finding in the recent publication of Organic Electronics. About 2 micrometers thick, the researchers claim their solar cell converts sunlight into electricity just as efficiently as the standard solar cells in use now. A typical silicon-based solar module, which uses glass, produces about 15 watts per kilogram of weight. These new cells produce 6 watts per gram — 400 times more.

Max Shtein, a professor of materials science at the University of Michigan, was the previous record holder of thinnest solar cell. He told MIT News that these new cells have, “tremendous implications for maximizing power-to-weight (important for aerospace applications, for example), and for the ability to simply laminate photovoltaic cells onto existing structures.”

The MIT team says that while the materials they’re using are clearly working, they could possibly be replaced. The real innovation here is the manufacturing sequence they used to make the cells — a procedure where the solar cell, the substrate that supports it, and a protective overcoating are all created in one process.

Although they have the thinnest cells, the researchers say that it will still be some time before they release a manufactured product. Short term commercial success is uncertain, but they see multiple applications for long-term solar power achievement.

The cell’s possible downfall — in its current shape, it may be too thin. Study co-author Joel Jean tells MIT News that, “If you breathe too hard, you might blow it away.”