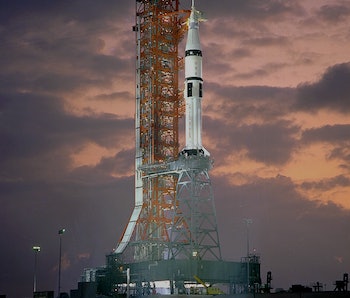 After a push from newly inaugurated President Lyndon B. Johnson, NASA launched the Saturn-Apollo Applications Program Office in August 1965. The goals of program were as scientifically rigorous as they were wondrous: Their mission was to achieve long-duration flights, perform space physics experiments, and accomplish advanced lunar exploration. The space race was on and this was what was going to get a man on the moon.

Less than a year later, on February 26, 1966, the U.S. premiered the Apollo-Saturn 201 mission. The purpose of the unmanned suborbital flight was to test the very first Saturn 1B launch vehicle — a powerful rocket capable of launching a fully fueled Lunar Model or a partially fueled Apollo Command Module into low Earth orbit. It set the stage for the creation of Saturn V — the expendable rocket that got man to the moon and launched the first American space station.

Launched from the eastern test range of Cape Canaveral, the Apollo-Saturn 201 mission lasted for 37 minutes and was considered a successful mission. NASA was specifically testing how the Saturn IB would work with the Apollo spacecraft hardware — the subsystems, heat-shield, and mission support facilities.

Designed by Chrysler, the Saturn IB acted as the booster for three more Apollo missions. The success of its first unmanned orbital flight, Apollo-Saturn 203, helped NASA design the S-IVB rocket restart capability — an essential feature that would help boost astronauts from Earth’s orbit into a trajectory towards the Moon.

However, at the launch of AS-204 in 1967, tragedy struck. While the Saturn IB was declared ready for manned flight, a fire broke out in the command module. It caused the deaths of all three members of the first crewed flight of Apollo — Virgil Grissom, Edward White, and Roger Chaffee. After the incident, the mission’s name changed from AS-204 to Apollo 1.

That was basically the end of the Saturn IB rocket — the disaster halted manned flights for 21 months, while NASA refigured their rocket technology. But achievements have to build from the bottom — and the Saturn IB paved the way to help us make it to the top. The super, super top.

More like this
Science
Sep. 16, 2022
The science behind The Rings of Power's mesmerizing title credits
By Tara Yarlagadda
Science
Sep. 14, 2022
Space satellite proves a crucial test of Einstein's theories
By Sarah Wells
Science
Sep. 15, 2022
Just 670 years ago, this supernova burst into the night sky
By Jennifer Walter
Related Tags
Share: