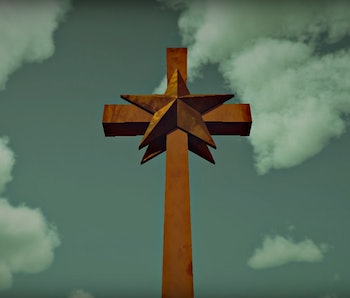 Indie video games have become the premier arena for artists to explore unconventional settings and themes atypical of mainstream video games. Firewatch is a first-person adventure game that takes place just after the 1988 Yellowstone fires, while last year’s Sunset is a point-and-click title starring a maid who develops a relationship with her employer, a ruthless dictator. A new game scheduled for release in 2017, The Church in the Darkness, is continuing indie games’ exciting new territory by taking inspiration from the 1978 Jonestown massacre.

From the appropriately-named studio Paranoid Productions, The Church in the Darkness follows Vic, a former law enforcement officer who travels to South America to rescue his nephew Alex from a dangerous cult. The game is a top-down infiltration game akin to Hotline Miami and Metal Gear Solid and allows players freedom to decide how to engage with enemies who stand in their way. Players can avoid detection altogether, kill a few, or go full Rambo, but whatever action they take has consequences.

The Church in the Darkness stars Ellen McClain (best known as GLaDOS from Valve’s Portal) and John Patrick Lowrie (Sniper in Team Fortress 2) as the “intense” Rebecca and Isaac Walker, leaders of the Collective Justice Mission who relocate their members following persecution from the U.S. federal government.

Jonestown and the actions of Jim Jones aren’t directly mentioned on Paranoid Productions’ website, but the allusions are very clear within the game’s eerie trailer.

The Church in the Darkness will be available on PlayStation 4, Xbox One, and for PC and Mac on Steam.