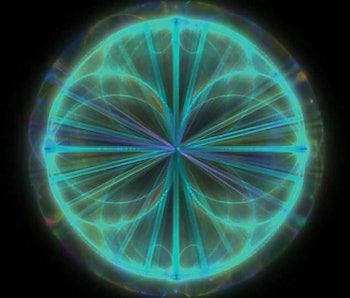 The word Darwinism has become a synecdoche for all the mechanisms implied by the Malthusian concept of “survival of the fittest” — the notion that the strongest members of a system survive to reproduce and pass their genetics on to progeny. But natural selection needn’t be limited to Darwin’s finches. When applying this idea to physics we get quantum Darwinism, the theory that the governing laws of biology apply to particles.

That’s a lot to take in, so let’s start from the beginning.

Classical physics, encompassing Newtonian laws of motion, electrodynamics, thermodynamics, and general relativity, emerges from the quantum world but the two understandings of the universe don’t neatly fit together. In classical physics, the world moves and operates with a certain type of elegance. In quantum physics, on the other hand, there is chaos on the atomic scale. Scientists aren’t able to really predict what will happen — all we have are probabilities of what could happen.

In 2003, a theoretical physicist named Wojciech Zurek and a few of his colleagues proposed Quantum Darwinism to link the two systems. As you might already know, in quantum mechanics, making measurements of a system tends to affect that system outright. This measurement problem arises because different quantum states are superimposed on one-another, creating paradoxical situations where a particle exists in contradictory conditions at the same time.

Of course, we only ever see one event actually occur. When we view these events from a classical lens, the system yields only one outcome.

Quantum Darwinism explains that superimposed states are “selected” based on what is best preferred and predictable under classical states. Darwinism selects possibilities from quantum system based on the pressures of the classical system.

Zurek outlines the whole thing in a 2009 paper, but there’s some actual evidence that supports quantum Darwinism. A 2010 study took images of scar structures on quantum dots, finding that the existence of periodic scar offspring states evolve into a more robust state. This kind of atomic evolution towards a stable existence is what you would predict under quantum Darwinism.

The bigger point of quantum Darwinism, however, isn’t simply that it could be the key to helping bridge two schools of physics decided by a chasm. It also lends support to the idea that Darwinism — the survival of the fittest — is universal to all other natural processes in the universe. It doesn’t simply explain why some life evolves and other life dies out — it also explains why some particles and physical processes occur and why others don’t. Quantum mechanics is often thought of as a seemingly random process, but it turns out that the atomic world we can’t see operates very much like the ecological world we experience every day.

We’re a long ways away from being able to relabel the “theory” of quantum Darwinism, to “law”. But don’t be surprised if you start to hear more and more about it in the next few decades. Bigger, more powerful physics instruments will allow us to observe things we haven’t even dreamed of — including the lucky particles strong enough to evolve.