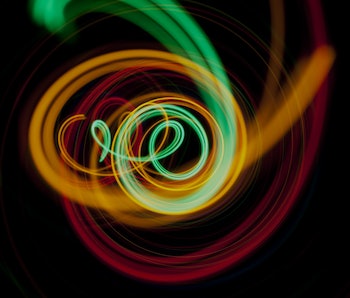 There is an old saying among cocktail party physicists: “Time flies like an arrow; fruit flies like a banana.” This is half true. Quantum physics doesn’t concern the tastes of insects, but it does quibble with the idea of unidirectional time. Quantum physics asserts that time is simply another dimension, meaning it can be explored like physical space. And if it can be explored, it can also not be explored. One should be able to stand perfectly still on a timeline without falling forward into the future.

That’s where the quantum Zeno Effect — a.k.a. Turing’s Paradox — comes in. Taking its name from Zeno’s arrow paradox (a moving arrow can’t actually be seen moving in any single instant, which means it’s not really moving at all), this idea basically states that if you never stop observing a particle that undergoes decay, then that particle will never decay. If that particle never decays, you’ve basically stopped it from doing anything. You’ve stopped time.

That probably doesn’t make any bit of sense if you never took advanced physics in college, so let’s take this one step at a time. The study of quantum physics is limited by the actions of the “observer” on a particular system. The most famous example of this is probably Schrödinger’s Cat, a thought experiment that illustrates the paradox inherent in quantum mechanics. You can learn more about Schrödinger and his damn cat here, but the basic conclusion is that before an observer can actually “measure” a certain system, she has to assume all outcomes are possible — and, therefore, before an observation is made, both of those outcomes exist simultaneously. They are “superimposed” on one-another.

But what happens if you are constantly observing the system? Well, if it’s the real world and not some crazy thought experiment, then the cat dies or doesn’t. But that’s not the way subatomic particles work. Multiple studies illustrate how measuring particles with increased frequency will affect the rate of decay — potentially suppressing it completely. And that’s because if you keep making measurements, there’s no time for the particles to progress into a superimposed state — they will always exist in their original, undecayed state

And if an unstable particle isn’t decaying, it’s basically frozen in time.

In a way, this demonstrates a possible way to stop time. Now, it’s nowhere near practical, of course — nobody has easy access to the type of high-tech scientific instruments you need to measure decaying atoms with such intense frequency. But the quantum Zeno effect does show that, at very, very tiny scales, you might be able to stop time. You just have to be a master at staring contests.

More like this
Science
6.30.2022 5:45 PM
The Large Hadron Collider restarts next week — here's what it's hunting for
By Rahul Rao
Science
7.2.2022 10:00 AM
Astronomers discover a quirky star with a surprisingly galactic feature
By Nancy Atkinson and Universe Today
Science
6.26.2022 10:00 AM
In the search for dark matter, an unexpected tool may give scientists hope
By Antonis Antoniou and The Conversation
Related Tags
Share: