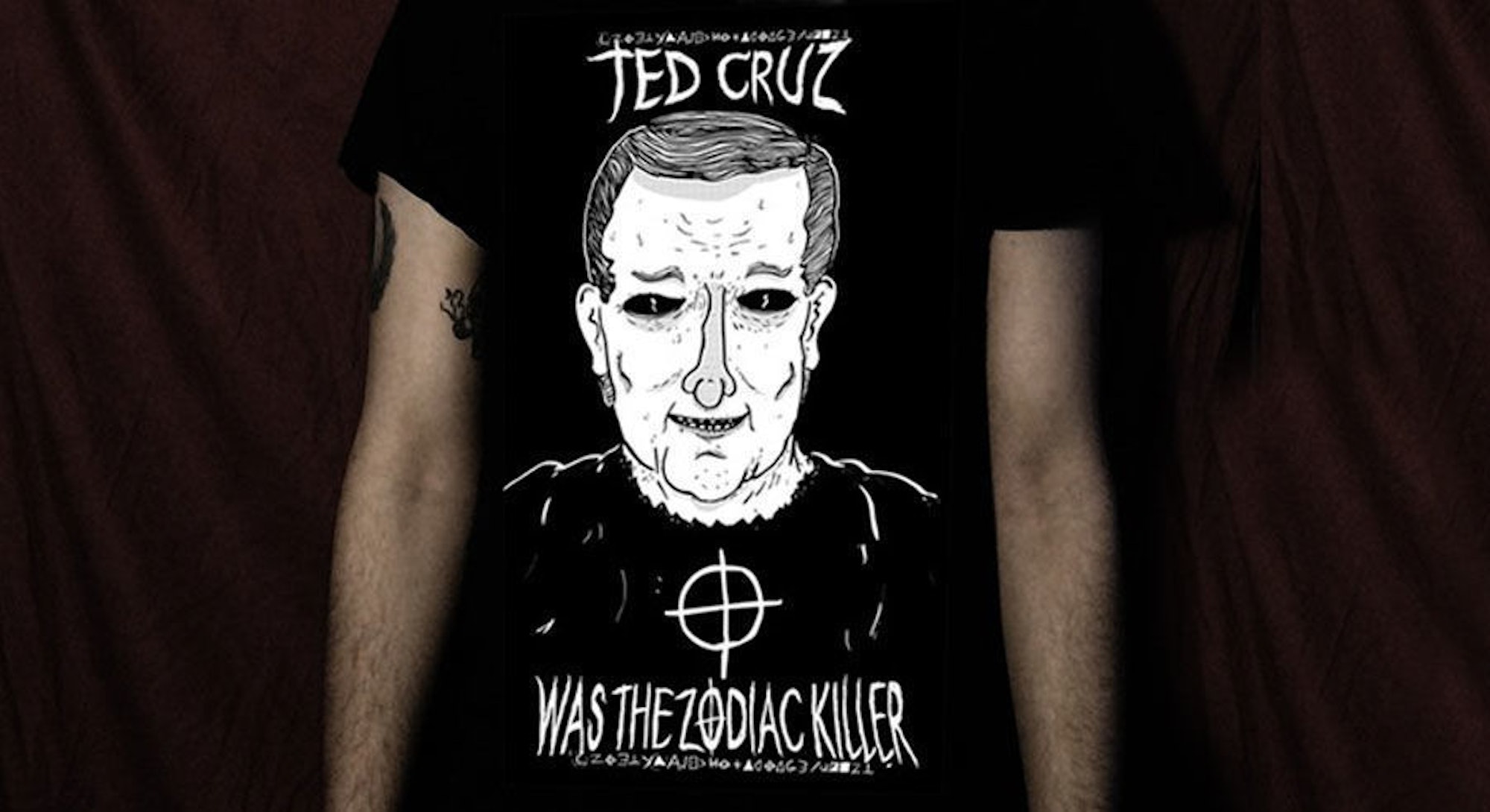 There’s something about serial killers that feels like nostalgic, old-world Americana. Maybe it’s the fact that many of them were at their most prolific during the summer months, when the rest of the country was lighting sparklers at barbecues and waving flags. Maybe it’s because their stories always become huge, public epics about a shared emotion. Though my generation has grown up in a post-9/11 world, the most notable moments in the American culture experienced by prior generations were just as violent. My grandparents, for instance, talk about the Son of Sam as often as they talk about Kennedy’s assassination. These are the narratives that bind Americans together in our collected sense of dread.

Tim Faust stumbled on a goldmine when he immortalized the joke now attributed to “weird Twitter” — that Republican presidential candidate Ted Cruz was the un-apprehended Zodiac Killer — on a t-shirt. Faust donated that goldmine to the West Fund, a non-profit that provides funding and support for abortion services to the people of southwest Texas. Faust talked with me over the phone.

Your sales are blowing up, dude. I saw your shirt trending on Facebook this morning. Why do you think the shirt appeals to people? Are people really into supporting the abortion fund?

God, I hope so! I hope it’s about the abortion fund! This whole thing has always been about abortion access for me. I mean, yeah, it’s an internet joke, but this has been my way of processing how I feel looking at this election.

I went to school in Texas, I spent most of my post-18 years in Texas, and I’m still here. The state is both extremely messed up and extremely cool.

There are so many folks stranded financially, they just can’t afford to pay for services they need. I know people whose sole job it is to relay to Americans this barbaric news, that Medicaid wasn’t renewed by Texas politicians and that, oh well, really sorry, they can’t support someone in their last days. Politics has actually gotten in the way of basic human decency, and that makes me fucking livid.

Suppose you’re a 14-year-old girl in Texas who’s been sexually assaulted or raped, and you need to get an abortion. Right now you need to ask your parents, and you’re out of luck if your parents were part of the abuse — which, statistically, they often are — and then in either case you have to drive 400 miles to El Paso and 400 miles back. The cost of this process is insane, just the base line cost of the procedure with or without insurance, on top of the travel you’ll do in order to get yourself to a place where you can have a medical procedure. You’re asking people to quit their job or take time off that they don’t have to see a doctor.

So that’s the situation, as I see it, in West Texas. Then we’ve got someone like Ted Cruz, this fucking rat-faced slimeball, who will never in his life experience the consequences of being pregnant or getting someone pregnant when they’re not ready. Abortion access is incredibly important, and it’s not just a women’s health issue. I’m talking about a concept of humanity, and politicians like Ted Cruz willfully violating a basic understanding of decency in order to gain power. That lack of empathy, I just can’t see it as anything other than barbaric.

I watched that video of a young Ted Cruz saying he wants to be in a “teen tit film,” and he actually reminded more of a young Jeffrey Dahmer. He’s awkward and thin, and trying to impress the guy behind the camera, but there’s just something off. Why compare Cruz to the Zodiac killer? Just because he was never caught?

I saw that, but to me, it’s irrelevant. You get a pass until you’re 18-ish, and he’s just a kid in that video. At some point, though, we all need to learn some fucking empathy. Cruz grew up in a prep school environment, and I can’t hold that awkwardness against him. But everything since, I can absolutely blame him for. His lack of humanity, that I recognize.

Look, I was terrified when I first watched him. The political theater, as I understand it, shares a lot with wrestling, which I’m very into. Every performer, every politician, is a human being, but in most cases they’re portraying a character. That character reads his lines, and the audience evaluates whether the things a politician or wrestler says are believed by the character themselves.

So Ted Cruz is an unreliable narrator?

Yes. There are individuals in the American political discourse who are great at blurring that line and disguising their inner monologue. Rick Perry, for instance, you don’t know what he really fucking thinks. He’s got that sheen of verisimilitude about him. A good contrast would be Jeb Bush. Guys like Bush feel immense pressure from the right, and in order to keep up, their statements become more and more egregious. The audience doesn’t believe guys like Bush really believe what they’re saying, because we can sense that disconnect. It only gets wider and more obvious as the campaign goes on.

Like I said, when I saw Ted Cruz first speak, that playbook of believability was out the window. It does not matter to him whether you believe he’s truly on board with what he’s saying in order to win. That impenetrable ego makes him immune to criticism that he’s insincere, and that’s what makes watching him get dumped on, absolutely destroyed by Trump, feel so cathartic.

I love that comparison between politicians and wrestlers. I actually have a long background in serial killers and American monsters. Quite a few serial killers in American history have needed the skills of a good politician.

There’s a couple of ideas at work there. The comparison is at its most potent with Cruz though. People can toss that serial killer thing around, and it’s funny, like, “Oh, Dennis Kucinich is the Boston Strangler, what a funny non-sequitur.” But it doesn’t stick. Now, Ted Cruz being the Zodiac Killer, there’s no air of presumed authenticity, because the dates don’t match, and it’s ridiculous, right? But it’s pervasive anyway. Something about his personality.

What’s the end game with the “Ted Cruz = Zodiac Killer” thing? For you, what would ideally happen? Is it about humiliating him?

Oh, I doubt his team knows about the shirts. Maybe they do. And yes, the continuing joke is that it’s been years and he has never publicly denied being the Zodiac Killer, so we have to take him at his word.

The end goal for these shirts is to raise money for abortions in Texas, and ideally, to help get inhumane laws overturned. I panic looking at this situation; I feel intense indignation.

Is a t-shirt gonna change the culture? No. But, man, I can try to make somebody squirm. Nobody on that stage, not Cruz, none of them will ever suffer the way a girl does who needs an abortion and can’t get one. They don’t have to bear the burden that some people have to in this country, and I want to make them feel discomfort if I can’t make them feel grief.

It’s not me anymore, though. It’s us, right? It’s we, me and artist, and the printshop, and the West Fund, and the buyers now. If we can make this dude sweat even a drop, that’s something.