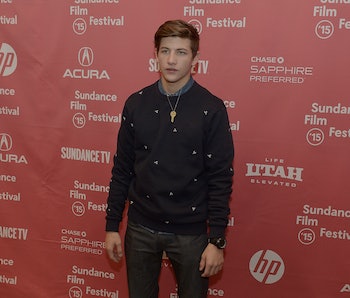 Fans looking forward to director Steven Spielberg’s adaptation of author Ernest Cline’s sci-fi fanboy novel Ready Player One breathed a sigh of relief earlier this month when the movie was pushed from its original December 15, 2017 release date to March 30, 2018 to make way for Rian Johnson’s currently-in-production Star Wars: Episode VIII. Spielberg has been in grown-up mode for a while now, relying on movies like Lincoln or Bridge of Spies to reel in the Oscars, and we wouldn’t want Spielberg’s first stereotypically Spielbergian movie since 2005’s War of the Worlds (Kingdom of the Crystal Skull doesn’t count) being overshadowed by those pesky Star Wars now would we? But when the release date changed, Spielberg was still looking for male lead. That is, until now.

Spielberg has tapped relative unknown Tye Sheridan to star in the film as main character Wade Watts, who must set out on a quest to solve pop culture obsessed puzzles in a complicated virtual reality construct called OASIS in order to amas a vast fortune and power.

We say “relative unknown” because Sheridan has been slowly making his way through roles since first gaining attention in auteur Terrence Malick’s The Tree of Life and Jeff Nichols’ Matthew McConaughey outlaw drama Mud. He also recently appeared in The Stanford Prison Experiment and Scouts Guide to the Zombie Apocalypse, and is set to step up to the big leagues as Scott Summers (aka Cyclops) in this summer’s X-Men: Apocalypse.

He’ll probably get lost in the mutant fold in that role, so Ready Player One looks to be his big break. It wasn’t easy. Spielberg allegedly auditioned thousands of young actors for the lead, and even cast actors Olivia Cooke and Ben Mendelsohn as the female lead and main villain, respectively, while continuing to search for the protagonist. The production even set up an open call via a website called ReadyPlayerOneMovieCasting.com, which basically let any kid off the street try out for the part.

The fact that Sheridan has created a steady career for himself without burning out means he’s not a flashy kind of actor, but competent and strong enough to hold a job as big as this. Sheridan beat out a whole mess of people, and if you impress someone like Steven Spielberg you know there’s something special going on there.

Get ready for Ready Player One, which hits theaters in March 2018.