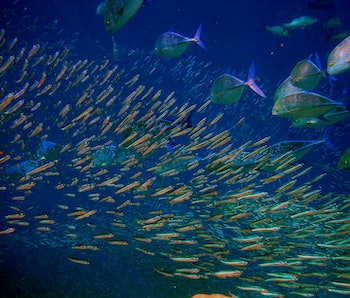 The world’s largest migration may be responsible for the vexing hum of the oceans. The low-frequency melodic buzzing has puzzled scientists all over the world for years. Now, University of California San Diego Assistant Research Biologist Simone Baumann-Pickering has posited a theory: The daily migration of marine life from the deep, dark mesopelagic ocean up to the more comfortable and abundant epipelagic zone is responsible for the noise.

Apparently, just as the fish are setting off on the steep climb to the ocean’s surface, they give off a sound “as if you’re sitting on an airplane and it’s humming, buzzing,” Baumann-Pickering told NPR. Then, they do it again as the sun rises as they begin to sink back down into the deep.

Baumann-Pickering, in a study collaboration with David Checkley (Scripps Institution of Oceanography) and David Demer (Southwest Fisheries Science Center, NOAA), has been listening to the sounds of the deep ocean with hydrophones, special microphones equipped to hear what is going on deep beneath the surface. It’s the same technology used to listen in on the chatter between humpback whales, but the scope of the conversation Pickering has picked up dwarfs even the most massive whale parties.

The so-called Diel Vertical Migration brings as much as 10 billion metric tons of marine life out of the shadows of the dark ocean, where they spend the day in relative safety, to search for food, making it the largest migration of vertebrates in the world. Baumann-Pickering has been studying the sounds of the Pacific, but the daily migration is a staple of all the world’s oceans.

Tiny fish that feed off plants, which convert sunlight into energy during the day, lead the charge to the surface, followed by all the fish that want to eat them, and of course, the fish that want to eat those fish. It may be strange that anything going into what is essentially a massive daily war of survival would want to give away their location by shouting it all across the seas, but Baumann-Pickering believes an answer will come with more study.

One possibility is that the fish “are truly, actively communicating — potentially to initiate migration,” she said. Or it might be something a little less palatable. “It’s known that some fish are considered to be farting,” said Baumann-Pickering, “that they emit gas as they change depths in the water column.”

More like this
Science
17 hours ago
Ancient Neanderthal Leftovers Reveal How Skilled Our Distant Cousins Were
By Miriam Fauzia
Science
Feb. 4, 2023
How Scientists Decide Whether Everyday Products Could Cause Cancer
By The Conversation and Brad Reisfeld
Science
Jan. 31, 2023
If Alien Life Exists on an Ocean World, It May Follow These Chemical Rules
By Kiona Smith
LEARN SOMETHING NEW EVERY DAY.
Related Tags
Share: