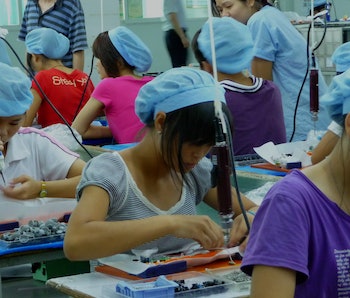 Think of all the things you buy that are made in China: the iPhones, the clothing, the electronics, the appliances, the gadgets, the toys. In the way we normally consider carbon emissions, China takes the heat for the climate change consequences of producing the stuff the rest of the world actually uses. We consider the production of the country overall, and divide that by population to consider the average citizen’s culpability. But what if you, the consumer, shouldered the blame for the carbon inputs of the goods and services you pay for?

New research out of the Norwegian University of Science and Technology has addressed exactly that question. It examined worldwide use of carbon dioxide, land, materials, and water at the level of household consumption, to show where people are demanding resources as opposed to where production is taking place.

In terms of national production, each U.S. resident is responsible for four times as much carbon dioxide as the global average. But from the perspective of goods and services consumed, that figure jumps to five times the world average. This makes sense — the United States, like most wealthy countries, outsources the production of many consumer goods to poorer countries where labor and other inputs are cheap.

Some European Union countries, for example, appear to have decreased their emissions in recent years, but that’s only if you don’t count the emissions caused by the production of goods later imported into those countries. When the carbon emissions created through the production of these goods is put on the consumer, the picture begins to shift dramatically.

Nowhere is that more true than China. The country is responsible for a terrifying amount of global carbon dioxide emissions — nearly 30 percent at last count. And while per-capita emissions are still well below what they are in the United States and other wealthy countries, they remain well above the world average when calculated in the traditional production-centric way. Even after China closes 1,000 coal mines, it’s still going to be a leader in pollution.

But take all of China’s exports out of the equation, and each Chinese resident is responsible for just 1.8 metric tons of carbon dioxide — half the global average. China is in essence the world’s factory; it is the obvious source of pollution but not exactly the cause.

The researchers undertook the work to give consumers a better sense of their resource consumption, and therefore the ability to make better decisions. “Households have a relatively large degree of control over their consumption, but they often lack accurate and actionable information on how to improve their own environmental performance,” the authors write.

If you want to save water, you need to think about what you buy and not what comes out of your tap, lead author and Ph.D. candidate Diana Ivanova told Phys.org recently. It takes about 10,000 liters of water to produce a pound of beef — skipping just one Quarter Pounder With Cheese is equivalent to skipping five hours in the shower.

And your iPhone 6 Plus? It has a lifetime carbon footprint of 110 kilograms of CO2. The phone’s production is responsible for 81 percent of that — emissions for which, under our current accounting system, China will continue to take the fall.

More like this
Science
7 hours ago
Are you ready for extreme snow?
By The Conversation and Michael A. Rawlins
Science
November 11, 2022
We might exceed this major climate tipping point in nine years
By Tara Yarlagadda
Science
9 hours ago
The scariest sci-fi movie on Netflix mirrors a real-life threat
By Tara Yarlagadda
Related Tags
Share: