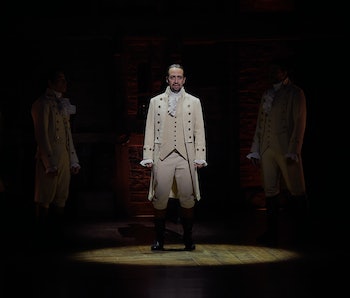 Last week, the latest Breaking News In Unnecessary Sequels was about a Mary Poppins follow-up starring Emily Blunt, a pleasant person who was ostensibly selected for her ability to ruin your childhood with a spoonful of sugar. Our speculations about who her Cockney chimney sweep co-star could be ran the gauntlet from Tom Hardy to Lizzy Caplan to the real Dick Van Dyke reprising the role, seeing as how he’s still a baller at age 90.

But now it looks like Hamilton star Lin-Manuel Miranda might be stepping into Dick Van Dyke’s old shoes.

Manuel is a Tony- and Grammy-winning actor and composer best known for Hamilton — otherwise known as that thing that made your mom briefly like rap.

According to Variety, Manuel might play a role in composing songs for this Mary Poppins update. On the one hand, this reeks of manipulation in the form of some studio exec going, “OK, we realize nobody asked for this, but everyone is nuts over Hamilton! They can’t be mad if they feel conflicted! Ha!” while petting his white cat and humming “Chim Chim Cher-ee.” On the other hand, Hamilton was like, so great, so who’s ready for a rap-heavy “Supercalifragilisticexpialidocious?”

More like this
Science
23 hours ago
Look: Astronomers Find a Potentially Habitable Exoplanet With a Violent Past
By Kiona Smith
Mind and Body
20 hours ago
Why It’s Finally Time To Stop Obsessing Over Counting Steps For Health
By Claire Maldarelli
Culture
20 hours ago
A Lot of ‘80s Sci-fi is Dated. Videodrome Feels More Relevant Than Ever.
By Chrishaun Baker
LEARN SOMETHING NEW EVERY DAY.
Share: