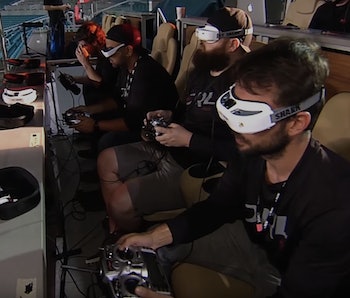 The Drone Racing League, an $8 million outfit that wants to legitimize the art of flying quadcopters through cavernous structures, officially kicked off Monday at the Miami Dolphins’ Sun Life Stadium. Witness the birth of a sport as a slickly produced 14-minute episode, posted to YouTube.

“Welcome to DRL, drone racing league, Level 1, Miami,” announces Kristen Kenney, whose title is “DRL Reporter,” at the top of the first episode.

The fact is that you can blast anything across an NFL stadium at 80 mph and you’re bound to come up with few genuinely interesting moments. Crashes into empty stands occur more than you’d think for 12 of the “world’s best” pilots. Wearing first-person goggles, the pilots occasionally squirm in their seats as though they’re playing Mario Kart. Finishes are tight.

The league wastes no time in accreting jargon, with an arcane system of bonus points and pilots sporting nom-de-drones like Spaztik, Rekrek, and Hazak. Borrowing a page from eSports — recognizing that flashing colors and novelty can’t support a game, and robots have no personality — the DRL attempts to give the sport human faces through brief reality TV-lite confessionals.

It’s still in need of more personality — with apologies to Spaztik, Rekrek, and Hazak, no one left a super memorable impression (though it’s perhaps hard to do with plastic goggles strapped to your face). It’s a sport in need of a heel as well as a face, though those could crop up soon enough — and even be you, with an open call for pilots planned later in 2016.

Keep up with the latest videos at the Drone Racing League’s YouTube page.