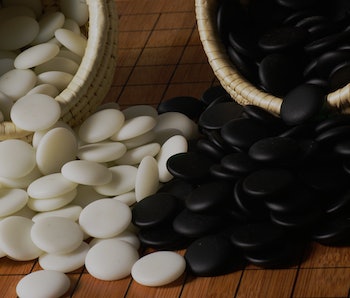 It didn’t take long for humanity to hit back in the battle against artificial intelligence for dominance in the ancient game of Go. In a matter of weeks, South Korean Go champion Lee Se-dol — considered the current best player alive — will take on Google’s AlphaGo, an artificial neural network that’s surprisingly good at the ancient Chinese game.

For this round, the search engine giant will award $1 million to Lee if he wins. Lee is, as American Go Association president Andy Okun put it in the wake of Fan’s defeat, now Go-playing humanity’s last hope.

“I think we Go players have taken some pride in the fact that we could beat the best computers,” he told the American Go Association. “Now we’re down to Lee Se-dol fighting for us.”

If this is a lot of pressure, Lee remains unfazed, though he is mere flesh and blood facing off against an opponent that neither eats nor sleeps nor knows anything else than crushing mortals at Go.

After the announcement that the Euro champ lost, Lee released a statement, saying “I heard Google DeepMind’s A.I. is surprisingly strong and getting stronger, but I am confident that I can win at least this time.” As the showdown approaches, his tune hasn’t changed, telling the Associated Press he predicts he’ll win 5-0 or 4-1.

In five matches, Fan was unable to best the computer. The loss was nothing short of a shock — conquering Go has notoriously eluded A.I. researchers for years. Compared with a game of chess, in Go a player has an order of magnitude more options from the very start.

“Before I played with AlphaGo, I thought I would win,” Fan said to the journal Nature in January. The loss, he said, was “very hard” — the computer played like an erratic, but brilliant, human. We’ll find out whether Lee is brilliant enough to match wits with Google’s creation on March 9.

More like this
Gear
2 minutes ago
How To Use Google’s New AI-Powered Visual Search
By Jackson Chen
Science
Feb. 5, 2023
AI Is Smarter Than Ever – But Some Problems Still Stump Today’s Computers
By The Conversation and Jie Wang
Innovation
Jan. 25, 2023
Starship orbital flight: SpaceX successfully loaded the rocket with over 10 million pounds of propellant
By Mike Brown and Molly Glick
LEARN SOMETHING NEW EVERY DAY.
Related Tags
Share: