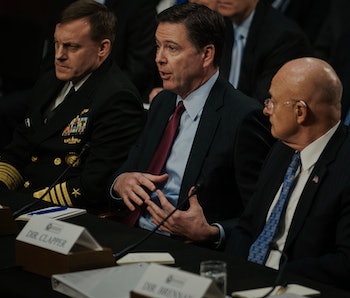 A large part of my job consists of interviewing people over Skype. More than a few times, after calling someone or answering a call myself, I see the interview subject’s face appear, while the little box in the corner that’s supposed to show my face remains black.

That’s because I, like many people who write about national security and civil liberties, have a big piece of tape over my built-in webcam. At this point, the tape has taken on the quality of a sticker on an electric guitar or a steamer trunk. In my mind, it’s as much a signifier of a certain ideology as much as a practical safeguard, though in truth it is both.

It’s not just governments that can turn your devices against you. Malicious attackers can surreptitiously record somebody if they’ve clicked on a shady link and inadvertently installed malware on their machine.

In most cases, the infected computer’s green light comes on to signal the webcam is recording, but not always. Researchers have demonstrated how attackers could activate a webcam without turning on the light, a capability the FBI has apparently had for years.

Considering I also have a camera on my smartphone, which I don’t have covered up, taping my laptop camera is a half-measure. But I see it as a Pascal’s wager, of sorts. His argument was: you should believe in God, because if you’re right, then you get to go to heaven, and if you’re wrong, there’s no downside. There is no downside to taking this smallest of precautions, and, potentially, a huge upside!

My webcam-taping days began in the months after the Snowden stories started coming out. After trying unsuccessfully to install PGP-encryption email on my laptop, a few friends and I decided to have a crypto-party. We invited over a security specialist to help us install PGP, set up our public and private keys, and get used to the basics of sending encrypted email.

At some point over the course of the night, he told us all to cover our webcams. I’ve been using the same blue tape ever since.

Over the past week, Apple CEO Tim Cook made headlines for refusing to create a backdoor for the FBI to crack a phone that belonged to one of the San Bernardino attackers. Cook has argued that to acquiesce to the FBI’s demand would amount to compromising the security of every iPhone in the world, a sentiment shared by security experts and cryptographers.

Just on Friday, Bloomberg reported on the existence of a White House memo detailing the government’s ambitions to be able to crack encryption and break into “the most secure devices, including Apple Inc.’s iPhone.”

The memo is the latest in a long line of attack by some in the U.S government, led by FBI Director James Comey, on encryption. Comey has blamed encryption for the attacks in San Bernardino, and repeatedly describes a phenomenon he calls “going dark,” — that is, subjects of an investigation using end-to-end encryption to defeat FBI surveillance. To hear Comey tell it, “going dark” is one of the great dangers facing the country. According to outside researchers, the reality is far different. A report whose authors included two current NSA officials found that the FBI consistently overhypes the supposed threat that “going dark” presents the agency.

Other mass surveillance capabilities, such as local cops using cell-tower spoofers to indiscriminately collect phone data, or automatic license plate readers, point to why a member of President Obama’s civil liberties oversight board has called this period “the golden age of surveillance.”

The best defense against bulk surveillance is the widespread use of strong, end-to-end encryption. A sophisticated government or sufficiently capable private attacker targeting you would still be likely to crack your communications, but if you’re not a specific target, you can make it slightly less likely that your data will get sucked up by the great vacuum that is the NSA.

Reporters at Guantanamo Bay get access to phones with a sticker on them that reads: “Use of this device constitutes consent to monitoring.” The first time I saw that, it startled me. You get accustomed to it, but knowing that you’re being watched — handled — can change your behavior in profound ways.

Keeping this piece of blue tape on my laptop is, in a small way, a way to push back. The Electronic Freedom Foundation, a privacy advocate, even offers its own branded webcam covers. Unlike at Guantanamo, use of this device does not constitute consent to monitoring.