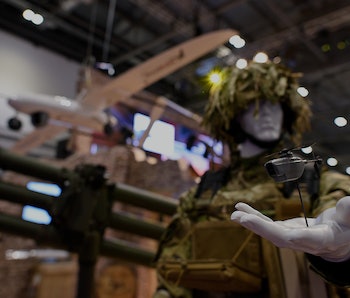 If deployable platforms that churn out unmanned weapons sound like science fiction, that’s because they are (see: World Devastators, introduced in the bonkers post-RotJ Star Wars: Dark Empire comic series). But an experimental arm of the U.S. military, which never backs away from early-‘90s sci-fi premises if it can help it, announced in February that it wants to test 3D-printed drones that give rapid, flexible air support to troops in the field.

The plan, as outlined in an Army Expeditionary Warrior Experiments proposal, is fairly simple: A soldier uploads information about any given mission and battlefield conditions to a design system, which creates a drone overnight using a combination of 3D printing and off-the-shelf modular components. The drones would be used for remote investigation, reconnaissance, and, potentially, breaching obstacles from the air.

To hear proponents of the drone plan tell it, the devices will be cheaper, tailor-made to mission, and always cutting-edge — as we develop better electronic components, they replace what’s on the shelf. “That is completely different than the way we do things now,” said Mark Valco, the director of the Vehicle Technology Directorate, in a statement.

It is not, however, completely different from other militaries around the globe with drone dreams. In August, the British Navy launched a 3D-printed drone off the deck of a warship. It was “fun,” remarked someone with the title of First Sea Lord Admiral — and though we don’t have any sea lords on this side of the pond, the army looks like it will be able to get in on this 3D drone fun in 2017, when the next series of Army Expeditionary Warrior Experiments are underway.