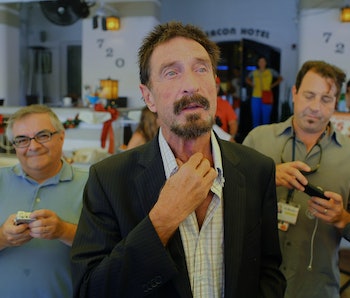 John McAfee — the gadfly and self-described “cybersecurity legend” — is suddenly trying to broker a peace between federal law enforcement and Apple. On Friday, writing on Business Insider, McAfee announced that he would hack into an iPhone for the FBI.

Only in a week this bizarre would McAfee’s offer be seen as anything other than obvious grandstanding. But as it happens, as the U.S. government and the world’s largest corporation clash over a national security case, McAfee could play a Solomonic white hat hacker. In what is ostensibly an open letter to the FBI, McAfee makes this offer:

“I will, free of charge, decrypt the information on the San Bernardino phone, with my team. We will primarily use social engineering, and it will take us three weeks. If you accept my offer, then you will not need to ask Apple to place a back door in its product, which will be the beginning of the end of America.”

Granted, it’s an unorthodox move for an unapologetic shit-stirrer like McAfee. This is a guy who holed up in Central America on the lam with a stash of guns and drugs and is now running perhaps the strangest campaign for President of the United States, which, in 2016, is truly saying something.

But for all its braggadocio, McAfee’s offer makes some sense. He’s running as the inaugural candidate of the “Cyber Party.” And he’s offering his services, and those of his team of “prodigies, with talents that defy normal human comprehension,” to the Federal Bureau of Investigation. McAfee is acutely aware of how dangerous a precedent the government would set if it wins this case, and, by offering his help to the FBI — who, up until now, has claimed that it’s unable to break the encryption on the phone itself — he’s attempting to offer Apple a way out.

It has been a trying week for the tech company. On Tuesday, a judge in California ordered Apple to disable the San Bernardino shooters’ iPhone security features. The case quickly turned into a national story, and, as a result — in the words of none other than Edward Snowden — became the “most important tech case in a decade.” With another, similar court case pending in New York, it’s become a battle for legal precedent: if Apple wins the New York case, the government will have a more difficult time arguing in California and down the line; if the government wins the California case, Apple will struggle in New York and beyond.

McAfee implies that the FBI is probably telling the truth in saying that they’re unable to confidently break into the iPhone. He writes:

“With all due respect to Tim Cook and Apple, I work with a team of the best hackers on the planet … And why do the best hackers on the planet not work for the FBI? Because the FBI will not hire anyone with a 24-inch purple mohawk, 10-gauge ear piercings, and a tattooed face who demands to smoke weed while working and won’t work for less than a half-million dollars a year.”

His offer, then, is a sort of sabotage. The FBI claims that Apple’s coerced assistance will be a one-time exception to Apple’s otherwise upstanding and strict privacy policies. Tim Cook, in his letter to customers, says that’s “simply not true”; McAfee agrees, calling this claim “a laughable and bizarre twist of logic.”

He goes on to elaborate:

“No matter how you slice this pie, if the government succeeds in getting this back door, it will eventually get a back door into all encryption, and our world, as we know it, is over. In spite of the FBI’s claim that it would protect the back door, we all know that’s impossible. There are bad apples everywhere, and there only needs to be in the US. .government. Then a few million dollars, some beautiful women (or men), and a yacht trip to the Caribbean might be all it takes for our enemies to have full access to our secrets.”

McAfee’s guarantee that he can crack the iPhone’s encryption — “I would eat my shoe on the Neil Cavuto show if we could not break the encryption on the San Bernardino phone” ought to put the FBI in a tough spot. Aside from the legal issues that it’ll probably invoke, the FBI has no good grounding for turning down such an offer. It’s the solution the agency claims it’s seeking. If it’s not about precedent — which it is — then the FBI has no reason not to accept McAfee’s (albeit raving) offer.