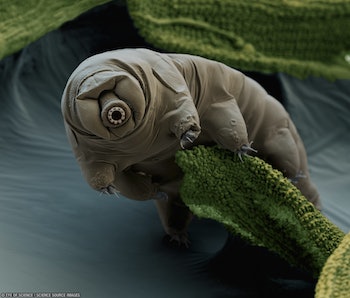 Tardigrades might be microscopic, but they’re among the toughest creatures on Earth. Japanese scientists recently revived some of the creatures, also known as “water bears” or “moss piglets,” after they had been frozen for more than 30 years.

The researchers extracted two tardigrades, measuring about 0.2 millimeters each, and one tardigrade egg, from a moss sample that was collected in Antarctica in 1983. They were defrosted and then soaked in water. One of the adults fully recovered and went on to lay eggs, most of which hatched successfully. The second never fully recovered and died after 20 days. The frozen egg hatched successfully, and that juvenile went on to reproduce, too.

Besides being one of the most ugly/cute things on the planet, tardigrades are known for being remarkably hard to kill. They can survive cold near absolute zero, heat hotter than 300 degrees Fahrenheit, pressures greater than those at the deepest point of the ocean, and intense radiation.

They can also survive in outer space, which has led to improbable theories that tardigrades are an alien life form that travelled to Earth via one or more meteors. Alien or not, though, the tardigrade’s resiliency makes it a particularly interesting object of study for scientists, especially those who would like to see human lives last longer.

“Our team now aims at unraveling the mechanisms underlying the long-term survival of cryptobiotic organisms by studying damage to tardigrades’ DNA and their ability to repair it.” said Megumu Tsujimto, lead researcher with the National Institute of Polar Research, in a press release.