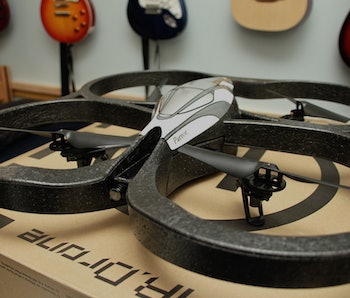 In what is nothing less than a trifecta of techno-security, the Federal Aviation Administration is partnering with the Department of Homeland Security and an Arlington, Virginia-based defense contractor called CACI International. Their mission? To boldly identify previously unidentifiable drones.

Drones are cool and all, but when you consider that the FAA gets more than 100 reports of completely unidentifiable drones flying near airports or manned aircraft each month, you can understand why “rogue drones” are a cause for concern. CACI International is at work on a system that might not only track and identify these drones as they approach, but take over the radio signals that control them and steer them a safe distance away.

How many of them do you think will “accidentally” crash to the ground in the process?

CACI’s proof-of-concept system makes use of radio frequency sensors placed in high, prominent places around an airport. The sensors detect irregular frequency activity attributed to unmanned drones, and upon detection, the system triangulates the location not only of the drone, but of the troublemaking pilot on the ground too.

More like this
Innovation
8.15.2022 1:33 AM
47 popular home upgrades people are making that are under $35 on Amazon
By Christina X. Wood
Innovation
8.13.2022 9:00 PM
Want to buy an EV? Here’s what you need to know about the Inflation Reduction Act
By James Morton Turner and The Conversation
Innovation
18 hours ago
Want to take a road trip in your electric vehicle? Prepare to go off track
By Molly Glick
Related Tags
Share: