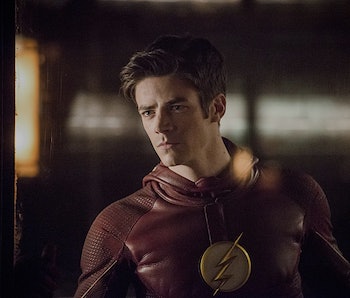 “Our tapping ceased to be just an exchange of letters and words; it became conversation. Elation, sadness, humor, sarcasm, excitement, depression — all came through.”

That’s what former prisoner of war and Vice Admiral James Stockdale wrote in his 1985 memoir In Love and War about a secret code that American prisoners utilized to communicate and survive in Vietnam. This week, it snuck its way into The Flash on the CW.

In “Escape From Earth-2,” Barry, the Flash of Earth-1 is imprisoned by Zoom and left in a fortified cell with Jesse, Harrison Wells’ daughter, and a mysterious man in an iron mask. The masked man can’t speak, but he’s tapping on the wall demanding attention. Jesse thinks he’s crazy, but soon Barry realizes what he’s doing: trying to communicate. He isn’t using morse code, but the same tap code used by the Vietnam POWs.

In seeking examples of innovation under adversity, you can look no further than the ingenuity of these guys. In June 1965, Four POWs in Hỏa Lò Prison devised a way to communicate across cells after toilet paper notes and whispers proved impractical and easy to discover.

Captain Carlyle Harris (“Smitty” to his friends), Lieutenant Phillip Butler, Lieutenant Robert Peel, and Lieutenant Commander Robert Shumaker came up with a simple code using no more than five taps at a time.

Here’s how it works:

“One of the famous, yet inelegant, usages of the letter ‘c’ for ‘k’ was in the transmission ‘Joan Baez Succs,’ which POWs sent around the camp after the American anti-war activist’s songs were played over the camp’s public address system.”

So simple, so effective, and so flexible. Tapping on walls, pipes, or even each other’s thighs were exactly how POWs kept sane, bonded, and even maintained chain of command.

Because of its simplicity, new prisoners were able to learn the whole system super quick. “The building sounded like a den of runaway woodpeckers,” POW Ron Bliss was quoted by PBS.

While these soldiers didn’t claim to invent the system — now-retired Col. Harris says he heard about its use in Germany during World War II — they are most closely associated with the code.

Another remarkable thing about the code was the unique abbreviations it created. A forerunner to tween text messages, phrases like “GN” stood for “Good night” while “GBU” stood for “God bless you.”

Try it out with scenes from The Flash. I actually tried, it’s kind of hard since I’m not sure what to count as a pause, but I did make out “Z” and “Q” and a few times “H.”

Col. Harris, now retired, was recently the subject of a short online documentary about the code for Airman Magazine. You can watch it below.

More like this
Entertainment
6.27.2022 1:00 PM
The oral history of Face/Off, Nicolas Cage’s inexplicable sci-fi masterpiece
By Ralph Jones
Entertainment
6.29.2022 10:30 AM
25 years ago, Nic Cage made his most explosive sci-fi movie ever — it was almost even better
By Jake Kleinman
Culture
6.21.2022 7:55 PM
You need to watch the most nostalgic time-travel movie on Netflix before it leaves next week
By Jake Kleinman
Related Tags
Share: