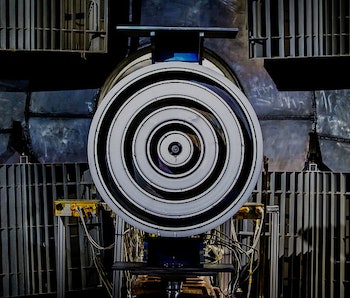 NASA is all in on getting to Mars, but if the space agency is serious about sending people to the red planet, it will need the right kind of technology. Introducing: the new thrusters that will propel astronauts the entire 140 million miles from Earth to Mars.

The tabletop-sized thruster prototype, dubbed the “X3,” was made by engineers from the University of Michigan’s Next Space Technologies for Exploration Partnerships (NextSTEP) program. This particular engine is part of Aerojet Rocketdyne’s XR-100 propulsion system, and could give the space agency the best shot at sending a crewed spacecraft to Mars.

That spacecraft will almost certainly be Orion, a new vessel designed specifically for long distance and interstellar space travel.

Of course, the XR-100 is competing against two other thruster designs — which also use plasma ejection to propel the craft forward. Fortunately for the Michigan team, the X3 is smaller and more lightweight, and based on technology currently used to maneuver satellites in space.

The thruster team wants to design a 200-kilowatt system that will be capable of shooting plasma exhaust particles out at about 65,000 mph. (Yikes!) The team also hopes to give the X3 a lifespan of around five to 10 years.

If all goes well, Orion could be fitted with the X3 in time for its 2020s missions to the moon — and to Mars in the following decade.