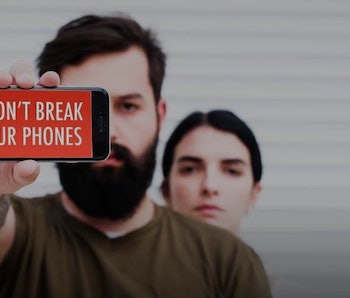 Protestors will gather outside the San Francisco Apple Store at One Stockton Street tonight for an emergency rally that will be the first of several planned demonstrations opposing a federal magistrate’s order that Apple help the FBI access the locked iPhone of the two San Bernardino shooters.

Organized by nonprofit Fight For the Future, more rallies will be held at 5:30 p.m. on Tuesday, February 23 in New York, Boston, Minneapolis, and other cities. New cities were popping up on the protest’s Facebook page throughout the day on Wednesday.

“This is the most important political issue facing the future security of internet users,” Fight for the Future co-director Holmes Wilson tells Inverse. “It is the number one privacy issue, but much bigger than just being privacy issue. The security of our phones and laptops affects our basic safety, from crime to financial security.”

The FBI has long pushed tech companies to create a “backdoor” for encrypted technology, though such an idea has received little political support. Just last week, four bipartisan members of Congress introduced legislation called The ENCRYPT Act of 2016, (it stands for Ensuring National Constitutional Rights for Your Private Telecommunications) that would prevent states from passing their own laws to break down encrypted tech.

Apple chief Tim Cook summed up the fears of consumers with his “message to our customers” posted on the Apple website about such a backdoor, or “golden key” as it’s been called:

“Once created, the technique could be used over and over again, on any number of devices. In the physical world, it would be the equivalent of a master key, capable of opening hundreds of millions of locks — from restaurants and banks to stores and homes. No reasonable person would find that acceptable.”

For his part, Wilson believes part of the problem is a basic misunderstanding of technology by legislators who don’t understand that backdoors into encrypted files aren’t vaults that can be securely shut to anyone without the proper authority. Instead they are security vulnerabilities that could be exploited by anybody with time and resources.

“We’re talking about medical devices that operate on encrypted systems, the financial and banking systems, the self-driving cars we’re going to have on the road soon that rely on information security. If you introduce a weak link into that chain, it endangers us all.”

On the heels of an unprecedented court order that would require Apple to build a software “backdoor” to help the FBI break into an iPhone, digital rights group Fight for the Future is calling for nationwide rallies outside Apple stores to demand that the U.S. government drop its dangerous request, which would undermine the safety and security of millions of iPhone users worldwide.

A separate website for the protests will be launched later today.

iPhone users and civil liberties supporters will rally outside Apple stores one week from the date of yesterday’s court order, at 5:30pm local time in each city on Tuesday, February 23rd. Protesters will be encouraged to bring signs, but will also have the option of loading a “Protest Sign” on their phone using Fight for the Future’s ProtestSign.org, which can turn any phone, tablet, or laptop into a light-up protest sign.

“Governments have been frothing at the mouth hoping for an opportunity to pressure companies like Apple into building backdoors into their products to enable more sweeping surveillance. It’s shameful that they’re exploiting the tragedy in San Bernardino to push that agenda,” said Evan Greer, Fight for the Future’s campaign director, “Security experts agree that any weakening or circumvention of security features on a phone puts everyone in danger. Encryption is what protects our airports, power plants, and hospitals. If the FBI succeeds in forcing Apple to help them hack into an iPhone, it will open the floodgates and set a dangerous precedent that will inevitably lead to more suffering and loss of life.”

The protests will carry the message “Don’t Break Our Phones” and “Secure Phones Save Lives”. The FBI is asking Apple to write software that would disable one of the iPhone’s most important security features, which deletes data on the phone after 10 wrong password attempts. If they succeed in forcing Apple to do this, it would create a backdoor that could be used on all iPhones, and open massive potential for security breaches and cyber attacks.

The Facebook event for the protest was launched this morning, and will soon list specifics for events being planned in each city. The protests will happen in a 100% grassroots fashion, organized by Fight for the Future members in each city who will step up to bottomline each event. The group used similar tactics last year to organize widespread rapid response protests in support of net neutrality.

More like this
Culture
13 hours ago
A 2011 Jake Gyllenhaal thriller reinvented the time travel movie
By Alex Welch
Science
12 hours ago
Does the Doomsday Clock actually mean anything? Experts weigh in
By Jon Kelvey
Gaming
11 hours ago
Genshin Impact version 3.5 is on the horizon — here’s what to expect
By Jess Reyes
LEARN SOMETHING NEW EVERY DAY.
Related Tags
Share: