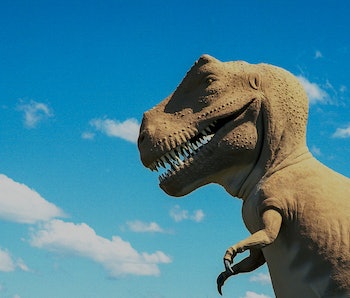 The rebirth of the dinosaurs will be among the great scientific accomplishments of this century, if you believe a new report from a right-wing British think tank. The Adam Smith Institute just released its projections for what the world will look like in 2050, and it has predicted some larger-than-life changes.

“Several species of dinosaur will be recreated, making their appearance on Earth for the first time in 66 million years,” writes Madsen Pirie, report author and president of the institute. “It will not be done à la Jurassic Park with their DNA extracted from blood-sucking insects preserved in amber. It was always highly dubious that enough of the DNA molecule would survive in this way. Instead dinosaurs will be recreated by back-breeding from flightless birds. Birds are modern-day dinosaurs, but they no longer look like dinosaurs. Deep within their DNA, however, will be information relating to the time when they did, and a combination of selective breeding and gene technology will be used to give them the characteristic features of dinosaurs — the jaws with teeth, the tail, the small forelimbs.”

Giving birds dinosaur-like features is indeed a thing that some scientists are working on. But there’s a difference between resurrecting a dinosaur and genetically modifying a chicken to look sort of like a dinosaur. It’s impossible to say whether or not the dino-chickens would even be able to walk around and feed themselves with their new dino-appendages.

Its also hard to see what is actually accomplished in the work, besides encouraging an unfortunately misguided God complex. “We [could] make a dino-chicken, and we [could] make a glow-in-the-dark unicorn,” one scientist involved in the project told LiveScience. “Basically, we can make anything we want, I think, once we understand the genes.”

The Adam Smith Institute does not shy away from fantastical predictions. “We propose things which people regard as being on the edge of lunacy,” Pirie told The Guardian back in 1987. “The next thing you know, they’re on the edge of policy.”

The latest report also predicts that today’s teenagers will one day enjoy the same standard of living as today’s millionaires, self-driving cars will be the norm, and energy will be abundant and cheap — thanks largely to nuclear power, natural gas, and solar sources.

Apparently, some people believe in a utopian future where we’re cruising around in solar-powered autonomous vehicles while we peer off at feathered dinosaurs hanging out in the countryside.